The Truth Is Out There - Or Soon Could Be 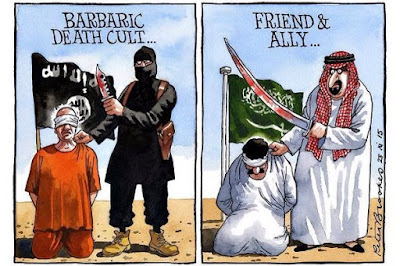 A developing story that's been making the rounds of British newspapers has the Saudis scared sh-tless over the prospect that their government's ties to the 9/11 hijackers could soon surface.

In the wake of the World Trade Center/Pentagon attacks Congress launched an investigation that resulted in an 838 page report, 810 pages of which were made public. Missing from the published report is a 28-page chapter that remains locked in a vault in the basement of the Capital Building.

The redacted 28 pages are said to contain details of the links between prominent Saudis, including prince Bandar bin Sultan, and the 9/11 terrorists and assistance that was allegedly provided by the Saudi embassy in Washington and the Saudi consulate in Los Angeles.

It was all just simmering along, largely forgotten, until a bill hit the floor of the US Senate that would strip immunity from nations found culpable for terrorist attacks that kill Americans on US soil. It seems both parties have about had it to the gills with the Saudis.

The whole business has given the Saudis a royal brown hemorrhage. It's bad enough that the White House has intervened, trying to block the bill and warning of diplomatic and economic fallout if it goes ahead. Apparently the Saudis have told the White House that they'll liquidate some $750-billion of US Treasury securities and other assets if the bill goes ahead out of fear those assets could be frozen - or worse. Sounds as though the House of Saud is pretty worried.

Obama is heading for Riyadh on Tuesday.

Look on the bright side, if the Americans start kicking Saudi ass maybe Trudeau and Dion might not have to keep kissing it.
Posted by The Mound of Sound at 10:46 AM