Is Canada a Criminal Enterprise? Yeah, Apparently So. 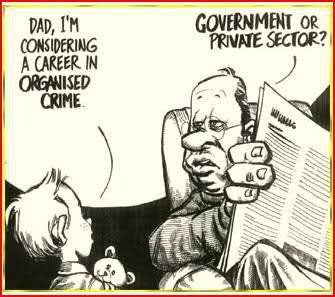 When lawyers, accountants, bankers and politicians get into bed the answer is yes, Canada is a criminal enterprise. Bruce Livesey explains in the National Observer, Canada's criminal establishment has been in place for nearly a century.

Livesey opens with a 2013 interview with "'Diane Francis, the well-known business columnist for The Financial Post and a long-time critic of offshore tax havens. We filmed her in a room at her swanky apartment building in downtown Toronto. And one thing Francis said on that warm muggy day still resonates with me. When asked why Canada doesn’t have the political will to put an end to the abuse of offshore tax havens, Francis replied: “Because the offshore and taxation lobby is the most powerful in this country.”

The numbers are staggering. The OECD claims that offshore banks globally hide some (US) $5-trillion to (US) $7-trillion from tax authorities, or up to 8% of the world’s assets under management. Moreover, an estimated (US) $11.5-trillion is being stashed in offshore accounts worldwide for one reason or another.

In Canada, Stats Canada documents how much corporate money flows to notorious offshore tax havens. In 1990, only $11-billion was being “invested” in offshore tax havens by Canadian corporations: today this sum is almost $200-billion a year and growing. Moreover, an estimated $8-billion is also lost annually through tax evasion, although this sum could be more than $20-billion.

In fact, after the US, Barbados is the second-largest recipient of Canadian foreign investment – with $71-billion in 2014, up from $50-billion in 2010, while the Cayman Islands is ranked fourth, receiving $36-billion. Barbados and the Caymans are high on that list for good reason – they are notorious offshore tax havens.

...As Liberal Senator Percy Downe has pointed out (who's valiantly devoted 10 years making a noise about offshore tax havens) governments can’t say they’re broke when they don’t bother collecting money they very well could. “A lot of monies are owed and a lot of money is not being collected,” he told me last year.

But therein lies the rub. As Downe has argued, the Canada Revenue Agency (CRA) is happy to chase after small Canadian businesses or middle class individuals dodging some taxes, but the CRA doesn't have the stomach or resources to go after the really big players socking away vast sums offshore.

After all, those who have the most wealth – namely large corporations and the billionaire class – have the power, influence, connections and money to ensure they pay as little taxes as possible.

...Canada is not a self-respecting nation when it comes to this issue. And that’s because our chartered banks, biggest law and accounting and insurance firms – which donate money and personnel to our political parties – are heavily engaged in the very lucrative business of moving taxable monies offshore. As Francis says: “You have an industry in this country of facilitating rich people to put their money offshore.” And that industry happens to reside in the most lucrative real estate in Canada – on Bay Street.

Ultimately, the offshore tax issue exposes who governments are beholden to. And they’re clearly beholden less and less to average citizens (if at all) and more to corporate interests and the billionaire class.

So if you want to know why nothing ever happens with eradicating offshore tax havens, simply look at who are the beneficiaries - and who's afraid of taking them on.

Well, we've got a new, progressive, reform-minded prime minister - or so we're told. One good thing is that, if Mr. Trudeau genuinely wants to take on "our chartered banks, biggest law and accounting and insurance firms" we've entrusted him with the powers to do just that and, if he uses those powers, we'll all know it. If, however, we don't see that robust, determined action coming from Ottawa, we'll know that this government has chosen to stay on the dark side.
Posted by The Mound of Sound at 5:28 PM

The news today and the last few days...
Vlad Putin has gazillions stashed away in shady foreign bank accounts.
The PM of Iceland ( most people don't know where that is) resigns because of hiding money in foreign bank accounts.
David Cameron the UK PM gets a bit of static over foreign bank accounts.
THAT'S it folks..
Out of eleven and a half million 11.5 MILLION documents that's all the fucking media can come up with!
Can we possibly entertain the fact that pressure is being put upon the media to UNDER REPORT this situation?
Here in Nanaimo a local car dealer,Tom Harris, was caught up with a con artist ( don't laugh at the irony) Ian Thow when he admitted sending cash $27,000 per month to Thow in the USA in an effort, or so he say, to flush out the con artist.
Google it; it's true.
The situation saw but passing attention in the media likely because of the large amounts of advertising revenue spent by the car dealer.
I am convinced that, world wide, pressure is being put on the media to pass over this story.

Trailblazer, I agree. Western media is more than willing to point fingers about Putin and other foreigners but not at Canadians or Americans. If we want to find out what our illustrious are up to we need to check the foreign press which will be doing the same from the other side of the pond.

And what about the Canada Pension Plan Investment Board and the announcement today that it has purchased on all our behalves, 40% of the agribusiness side of Glencore, the biggest unknown company in the world? It is 10th largest. It is in the mining business around the world and transports oil. Quite why we are investing in Glencore as a country, basically, when many are trying to get pension funds off oil, is beyond me. We might be only buying into the agribusiness side of the company, but how is that separated from the not-so-nice parts at a corporate level? Inquiring minds want to know what CCPIB is thinking.

I'll repeat a post I made on another blog, to which I expect exactly zero replies:

"Glencore agribusiness. Hmm. Anglo Swiss. Tenth largest company in the world. Who knew? Not exactly a sterling reputation all things considered, particularly on its mining activities.

How does CCPIB separate in its head that agribusiness part of Glencore from all the various mining and oil activities it has around the world? Since the merger with Xstrata, Glencore has been accused of all sorts of nefarious tax dodging all around the world, as a glance at Wikipedia will tell you. It is also in the oil business

Worse, in my opinion, is this: If you've never heard of Genel Energy, you should Google it. The all-time wonder boy and general nitwit Tony Hayward, the same man in charge of BP at the time of the oil spill in the Gulf of Mexico and who was generally castigated for his behaviour after the spill, is the Chairman of Genel Energy.

Genel Energy's business is buying oil and gas from the Northern Iraq part of the country held by the Kurds. It then ships this oil to Turkey. Iraq does NOT agree that this oil belongs to the Kurds. In the mix of oil sent to Turkey it is believed the other ISIS stolen oil from Northern Syria and Iraq is mixed in, clouding its origins. There are many, many articles on the illegal ISIS oil trade that keeps that lot going with a bit of hard cash, and a few on the Kurdish oil-selling. Nothing on MSM, of course. That oil truck convoy that Russia bombed back in November was regarded as ISIS oil by many, and the US for some unknown reason hadn't done much to stop the ongoing trade until Russia highlighted it.

To say the least, this operation seems somewhat shady. Google Genel, they have a webpage, which handily does not discuss the politics of who owns the oil and gas they ship.

Notably, Mr Hayward is also on the Board of Directors of Glencore (since 2014), which to me at least gives some pa"use as to the general way of business Glencore operates.

And to this merry band of cutthroats, CCPIB has invested $2.5 Billion of Canadians' money.

What is going on?"

I wonder just how many pension funds are tied into this affair?
The world revolves around a bullshit economy a totally unreal fabricated world that is not sustainable without these tricks and mirrors!