Just When Dion Needs All the Help He Can Get 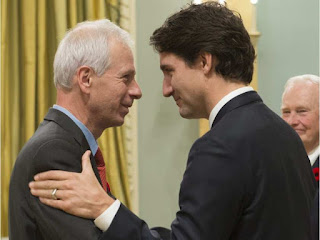 It's been one hell of a 2016 so far for our foreign affairs minister, Stephane Dion, as he's had to repeatedly defend Canada's sale of $15-billion (now closer to $12-billion thanks to the fall of the loonie) worth of high-tech death wagons to the Saudis. He's been squirming so hard you could literally hear the sweat roll down the crack of his butt cheeks. It wasn't pleasant.

Hang on, Stephane, help is on the way. By help, I mean the Saudis themselves. They've been doing their bit too, making sure that their dutiful allies get a little cover. How? Easy, by blocking UN efforts to expose ongoing Saudi war crimes in Yemen. From Foreign Affairs magazine:

Saudi Arabia and its Sunni-majority Persian Gulf allies don’t hold a single seat on the U.N. Security Council. But you’d hardly know it: Over the past year, they have wielded their diplomatic clout like a major power, shaping the 15-nation council’s diplomatic strategy for Yemen and effectively suppressing U.N. scrutiny of excesses in their 13-month air war against the country’s Shiite rebels.

An examination of Saudi Arabia’s Yemen diplomacy provides rare insights into the ways a vital U.S. ally has been granted a privileged perch at the world’s most powerful security body. Working through its military allies — principally the United States, Britain, and Egypt — Saudi Arabia has succeeded in blocking actions to restrain its military conduct and highlight humanitarian costs of the conflict.

“They are able to shape discussion on Yemen even when they are not in the room,” Akshaya Kumar, the deputy director of U.N. affairs at Human Rights Watch, said. “They are able to really maintain a one-sided approach to the Security Council’s handling of the situation in Yemen and particularly relating to their abuses on which the council has been silent.”

Make hay while the sun shines, Steffie, because this Saudi smokescreen may not last for long. Already the Americans and the Brits are getting a little antsy about their role in facilitating the Saudi attacks against Houthi civilians, including the supply of cluster bombs to renovate Houthi villages.

Before leaving the subject of Canada and Saudi Arabia's human rights, Vice News has an important story about how the Saudis's execute juvenile offenders.
Posted by The Mound of Sound at 7:59 AM