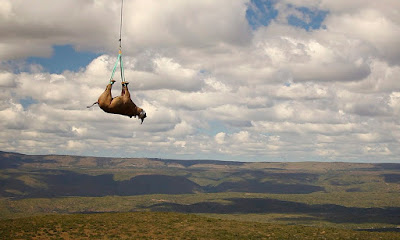 "Hey, dad, what's that in the backyard?"

A few months back I discussed this idea as a business concept with a friend in the environmental business. It's a form of climate change adaptation that we've previously experienced in the form of invasive species. It's how Australia found itself overrun with rabbits and cane toads.

However, today, species are on the move. Even plant species are now migrating away from the equator at a rate estimated at 8-inches per year. The fastest migrating species are, naturally, the most mobile - birds and marine creatures. Where I live we see that on our doorstep. Bait fish - southern herring and sardines - have moved northward bringing their natural predators, their food chain, in pursuit. In our local waters, humpback whales were rendered extinct a long while ago. Now they're back, in big numbers, along with everything from big schools of white-sided dolphins to brown pelicans, the latter having taken up residence in the area between Victoria and Race Rocks. Large numbers of sea lions that once turned up her briefly every year for the annual herring run have now taken up permanent residence indicating an ample supply of year-round feed has entered the area.

But what about species that, for one reason or another, cannot migrate? Some terrestrial creatures are blocked by oceans, rivers, canals, fences, walls, even highways that they simply cannot cross in any meaningful numbers. Then you have the alpine species whose only option is to keep moving up the mountainside until they either run out of food or simply cannot go any higher. With biodiversity already reeling, can we afford to lose species, plant and animal, that cannot migrate?

There's a new term for species rescue called "translocation." The idea is to preserve an endangered species by relocating a suitable number of them to a carefully selected habitat elsewhere.

One of the top experts on the process is a German-born conservationist, Axel Moehrenschlager, who works out of the Calgary Zoo.

Dr Axel Moehrenschlager said cases of “translocation”, such as India’s plan torelocate tigers to Cambodia or South Africa’s scheme to airlift rhinos to Australia, have increased exponentially in recent decades and will become more common due to human pressures driving species closer to extinction.

...“The impact that people have on the planet is ever-increasing,” he said. “The times when we could simply hope that we could set areas aside for species are increasingly disappearing. We are in a situation of emerging threats due to climate change that we need to more actively manage species otherwise we will lose them.”

“To me this is not controversial as long as the correct process is followed. Success is not guaranteed, but the alternative of not acting is guaranteed - and that is extinction. We have to remember the reason this is done is primarily because one is trying to avoid extinction, but also because one isn’t able to restore species within their indigenous range because the threats in those zones are so pervasive and can’t be avoided.”

Whether migration occurs naturally or through translocation, Canada will increasingly become a destination for new species. It's great to have big numbers of whales and dolphins showing up but it's not so great when it comes to a possible infestation of Humboldt squid.
Posted by The Mound of Sound at 9:49 AM

On a similar note, the best way to perserve species may be to have them in Canada and USA and harvested by big game hunters.