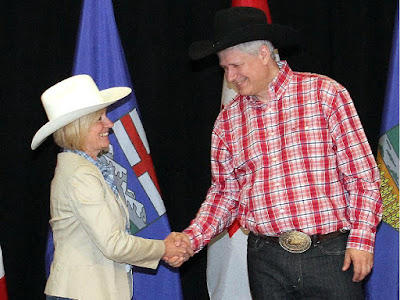 Don't get your orange knickers in a bunch over the Leap Manifesto. It's just the latest family business of the Lewis clan. Think of it as a conversation starter, a companion piece to Naomi's underwhelming book and Avi's latest film. And the kids have Stephen's backing all the way - as you learned at the party dirge on the weekend.

The Leap Manifesto, according to Avi & Co., is a plan, only it's not a plan at all but more of a whinge. I'll leave it up to your fellow New Democrat, Cliff of Rusty Idols to put LM in a clearer perspective.

The Leap Manifesto was a masterpiece of high level manipulative communication. Long sections full of stuff that all progressives can find to agree with but inextricably bound with poison pills in every section couched in rhetoric deliberately designed to force 'If you disagree with this that means you also disagree with THIS' false conclusions. I've already had one earnest and slightly hysterical young ND tell me that opposing Leap means 'attacking our environmental and indigenous allies'. Leap and its supporters rhetoric is explicitly designed to result in such nonsense.

Cliff's right, the Leap Manifesto is a hot mess. That said, the idea that we have to leave at least 80% of fossil fuel reserves untouched, stranded as it were, did not come from the Lewis clan. They're not scientists, anything but. The warning came from scientists and it's supported by a powerful scientific consensus.

The bottom line is that 80% of known fossil energy reserves must be abandoned if we're to have any reasonable chance of staying within the 2C "never exceed" warming point beyond which lies runaway global warming, unstoppable natural feedback mechanisms that will rapidly eclipse everything we've done since the advent of the Industrial Revolution.

Now you may not accept the science. You may be a climate change denier yet you assure us you're not. Ergo you accept the science and what goes with it, including that 80% business. It follows that, if we can only use 20% of the known fossil fuel reserves as we transition to clean energy, that dictates that we use the lowest-carbon fossil energy options. That rules out high-carbon fuels, particularly coal and bitumen.

So, Madam premier, if you accept the science and yet still insist on expanding Tar Sands production and export that means you are at best indifferent to the 2C warming target and content to trigger runaway climate feedback loops. Just wanted to clarify that.

Now there's a cringeworthy term that you drylanders are particularly fond of - "tidewater." You want to get your natural resource, bitumen, to tidewater so it can be shipped to waiting buyers in Asia. Here again you have options but, exactly like your Tory predecessors, you're only interested in one, Option B.

Option B is for the production, transmission and export of bitumen in hazmat form, also known as dilbit. This is bitumen mixed with light oil (condensate) and, once heated, forced through pipelines at high pressure. It is hazmat, hazardous material. It contains a variety of nasty products including abrasives, corrosives (acids), heavy metals and, of course, pet coke - granular and especially carbon-filthy variety of coal.

When a supertanker flounders and dilbit is spilled into the ocean (as it surely will be, eventually) dilbit goes through a process of separation. The light oil, diluent, separates and heads to the surface where it evaporates into a fairly toxic cloud. The bitumen part congeals into lumps and heads to the bottom where it tenaciously clings to rocks and the seabed to leach out its acids and heavy metals and carcinogens for decades. You, premier Notley, have not the faintest idea how to clean up a dilbit spill. No one does and, given the depths of the seabed around here, no one could afford to clean it even if the technology could be created. We know you won't cover the tab nor will the fossil fuelers. You would ruin our coastal ecology for - well, effectively forever - although I'm sure your apologies would be as sincere as they were meaningless.

All of which brings us to Option A, the one you and your Tory predecessors never want to mention, refining your crud into synthetic crude right on site in Athabasca. All those heavy metals, acids, abrasives, carcinogens and pet coke? Refine all that stuff out first. Then at least you would be able to argue that you were willing to do the environmentally responsible thing in order to somewhat mitigate the risks you were imposing on others, the folks who call what you call "tidewater" home.

That still doesn't mean that fully refined synthetic crude wouldn't be problematic but it would be much less hazardous. Did you know that Exxon still hasn't completed the cleanup of Prince William sound from the Exxon Valdez spill just about 27-years ago? Imagine if the Valdez had been transporting something as lethal as dilbit.

But you won't even make that gesture of decency. Because that would add to your province's already enormous greenhouse gas emissions. Even worse, it would demonstrate that bitumen is a bad bet, economically unviable.

Economists use a term, "externalities," to describe the costs of losses and risks that can be offloaded onto others. Greenhouse gas emissions have long been an externality.  Carbon taxes are an attempt to make the polluter pay only the money collected should be paid to the nations and peoples most directly affected by the emissions and that's not you, Alberta.

The risks and inevitable losses to our coastal ecology are also treated as an externality, the cost offloaded on someone else, kept off the province's and energy producers' books.

If that was to be treated as at all real, you would be setting up a fund for that. But what is the value of something like a coastal ecology that couldn't be fixed, ever? That kind of money doesn't exist - not in Athabasca, not in Alberta. If you tried to levy even a fraction of the amount your energy producers would close up shop and di di mau right out of Alberta.

So the only way to make you happy is to make us miserable. Your sole path to "boom and bust; easy come-easy go" prosperity demands our risk of catastrophic ecological destruction. Why should we put up with that deal? Because you don't want to read the writing on the wall? No thanks.

i have to say I'm baffled by this reaction. i read the manifesto after reading this article (and the rusty idols one) and was left wondering if there was another document that i was missing...!

i didn't think it was radical, whiny, long-winded or manipulative: it states the goals and general methods to accomplish the goals based on pretty morally reasonable and/or factually-based first principles. the fact that it's not, perhaps, politically pragmatic, nor a nuts-and-bolts plan, does not disqualify it to my mind.

after reading this blog for years, i would not have been surprised had mound's name been listed in the authors.

Anon, let me explain why I don't support the Leap Manifesto. It is a bunch of motherhood statements, awkwardly linked. It notes, correctly, that we have until about 2020 to effect massive reductions in our GHG emissions but then goes on to advocate a Kumbaya process that would rule out that deadline being met.

I've read their funding explanation and it comes down to an end to fossil subsidies, higher corporate and high-income taxes and then a switch to green infrastructure from investment in existing infrastructure - roads, bridges, electrical grid, water and sewer systems.

I assume that Klein and Lewis, being scribes, have no clue about the perilous state of our critical infrastructure and it's obvious they haven't considered the fragility of our society and our economy. This is not surprising.

As Klein admits in her book, she and hubby are latecomers to the climate change issue. They really don't understand the science in all its dimensions yet they see themselves in some messianic role, our saviours.

If we're looking for climate change solutions there are plenty of rich sources - the Brit Met Office, Hadley Centre; NASA and NOAA; experts such as Hansen, Lovelock and Jason Box and much more - people with 'bleeding edge' knowledge. People like Klein and Lewis seek to insinuate themselves between those sources and us even as they put their spin on the situation.


The greatest failure in the Klein/Lewis climate crusade is that they treat climate change as the disease, not a symptom of a greater contagion. They don't understand that climate change is linked to two companion symptoms, ultimately just as existential - overpopulation and over-consumption of Earth's resources, renewable and non. The solution to anyone of these requires that all three be solved. The disease is found in the common threads that run through all three main symptoms.

When I was born the global population was well under 3-billion. Today we're at 7+ billion heading to 9. It took us virtually all of the 11-thousand year history of human civilization to first reach 1 billion and just 2 centuries to swell that to 7, just a few decades more to grow that to 9. Think of it this way - 11-millennia to 1, 2 centuries to 7, 3 decades to 9.

Then there's consumption. Today mankind is mortally dependent on consuming the planet's resources at 1.7 times their replenishment rate. That rate grows every year. We're in a headlong race to the bottom.

When you take these three challenges, what is the Leap Manifesto but a gestural statement riddled with impracticality and unattainable demands?

I have better uses for my time than chasing poseurs.