Will Justin Toss Us in Shifty's Jails? 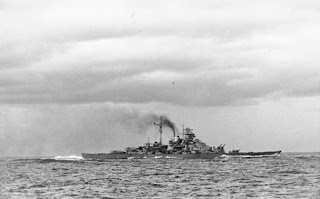 It reminds me of the Bismark running at top speed trying to break out of the Denmark Strait to reach the target-rich North Atlantic hunting grounds. Only this time the threat isn't some German battleship but a pipeline giant, Enbridge, making for the waters of the northern British Columbia coast, trying to break out to the open sea.

Our Bismark is the Northern Gateway, a massive pipeline project designed to convey hazmat heavy oil, dilbit, from the Tar Sands of Athabasca, across British Columbia's wilderness mountains and rivers, to the coastal port of Kitimat an onward in lumbering, heavily laden supertankers through the Douglas Channel and across the treacherous waters of the Hecate and Johnson Straits to Asia.

Trudeau assured us the Northern Gateway was a non-starter under a Liberal government. We took him at face value and enjoyed a feeling of reprieve. Since then we've watched as this prime minister has shown himself spineless on the hard issues - the Saudi arms deal,  the Energy East pipeline, the expansion of Tar Sands production, the TPP (by all appearances) and now, by some accounts, even the Northern Gateway pipeline to boot.

We should have seen it coming when Trudeau did nothing to rehabilitate the rigged National Energy Board, dominated as it is by energy industry shills appointed by Harper. I'm sure if he'd felt the need for a National Energy Board in service to Canada and the Canadian people instead of the Calgary Petroleum Club and the Communist Party of China, we'd have a new board by now. We don't.

Likewise we've heard nothing of Trudeau dismantling Harper's pipeline security goon squad comprising local police, the RCMP and CSIS charged, by the federal surveillance state, with monitoring legitimate, democratic dissent and tracking individuals thought particularly noteworthy. This taxpayer funded security/intelligence brigade holds a twice annual briefing/intelligence dump for its counterparts in the energy giants. Not hard to figure out whose side they're on and it's certainly not that of concerned Canadians.

As the National Observer reports, word of the Northern Gateway resurrection has reawakened opposition groups once again, ready to stand up to Big Fossil and a federal government in its service.

"You need to understand nothing has changed in terms of our opposition — it’s steadfast, solid, and deeply-entrenched," Grand Chief Stewart Phillip of the Union of BC Indian Chiefs told National Observer. "Governments are known to be quite often inconsistent, but we’re not." Phillip was speaking of the Enbridge Northern Gateway Pipeline proposal.

"We’re committed to our lands and territories, particularly protecting and defending our rivers and streams from catastrophic pipeline ruptures or tanker spills."

In a Bloomberg article published on Monday, federal representatives refused to release specifics on Trudeau's pledge ban on tanker traffic in northern B.C., and would not confirm that Northern Gateway, is in fact, dead.

Before his election last October, the Liberal leader promised the pipeline “will not happen” on his watch if he became prime minister, but Thomas-Muller argued his lack of clarity on tar sands expansion is a flashback to the government secrecy of Stephen Harper's administration.

“This is all part of the shell game that the federal government of Canada under Trudeau continues to play from the Harper days,” he explained.

“The Liberal government has been really effective at spinning messages and confusing things with the whole pipeline debate in the country, and I think we’re seeing a bold hypocrisy with the recent international signing of the Paris accord, which included our own prime minister committed to a 1.5-degree target and still talking about building pipelines.”

It was one thing when we talked about having to resort to civil disobedience to block the Northern Gateway. We saw that behind that, our enemy was Harper. That'll change if we have to reinstate those plans yet again. If Trudeau goes back on his word, if he tries to betray us, this time our enemy will be Canada.
Posted by The Mound of Sound at 12:14 PM

The "Welcome Back" at the top of your page is taking on new meaning.


Isn't that the truth, Al. I've been thinking about taking it down and putting the old Maple Leaf in distress image.

I'm not impressed at all Mound. The issues you outlined that Trudeau's waffling on or worse doing the opposite of what he promised are very very serious. If like you said he is "spineless" when it comes to making the hard decisions, then we are in serious trouble. There is also secrecy taking place very early with this new government. Their alledged consulting with the public on the TPP is turning out to be a farce. They are not letting in the key people who understand that these deals are not about trade, but about corporate rule. Very knowlegeable people, so far have not been able to be part of the supposed public consulting. The liberals are already showing that they do not have the interest of Canadians in mind.They are going through the motions of appearing to be transparent and consultive. Can you imagine what it would be like to have a a Prime Minister with the integrity and strength of Grand Chief Stewart Phillip?

I will be in support of you upside downing of our Maple Leaf if JT folds on his promise of no Northern Gateway/no oil tankers traversing northern inside waterways. This is the easiest of the three proposed dillbit lines to veto, if it is allowed to go ahead it will be not be thru the weight of the scientific evidence, rather it will be the shorter term pressure of western jobs and political expedience.

Anyong said....turn it up side down. Pull another Danny Williams it is needed. Mindless, mindless, mindless. They are not able to get their heads around anything else but oil. Why doesn't N.B. and Nova Scotia want a pipe line. They are getting all the energy they need from Labrador by way of water.

Liberals Cons..no difference, turn them upside down and they look like sisters. Why should we be surprised when the "Hair with no brains that walks" is reneging on his election promises.

Nice post...I look forward to reading more, and getting a more active part in the talks here, whilst picking up some knowledge as well..
humidity chamber manufacturer

Justin:
Don't ya Play, With, Me ,
cause you're playing with Fire.