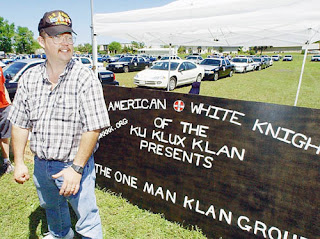 Okay, well not so much. Still it's one sure vote that DJT can no longer count on. And for the record, it wasn't S.J. Harper, it was J.J. Harper, and, no, there's no relation as far as anyone can tell.

J.J. Harper was, until today, the Imperial Wizard of the Ku Klux Klan in Georgia. J.J. died of lead poisoning today after a shootout with law enforcement. The cops were called to a domestic dispute.

"Yes, he was. He had a membership drive on the courthouse steps," said Deputy David Grantham with the Dooly County Sheriff's Office.

During the standoff, Harper told officers and various news outlets that "someone was going to die today".

Harper shot multiple rounds at officers before walking back inside his home.

Agents confirm they fired a round at Harper before a gunshot was heard inside the home.

The local cops called the incident a "stand off" which is a curious term to describe an 8-hour confrontation in which Harper was said to come out of his home several times to launch a fusillade of fire at the officers.

If that was an armed black guy on his porch, do you think he would have lasted 8-hours? Just askin'.