Another Reason Why the Demise of PostMedia is Way Overdue 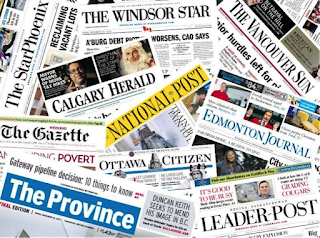 There it is, right on the National Post. "'An Unequivocal Act of Integrity' - Harper's lawyer defends former PM's role in Duffy Affair."

Apparently Mr. MacLeod didn't follow the Wright-Harper scandal or the Duffy trial very closely, perhaps not at all. It seems he didn't look at the documents that were piled up before Justice Vaillancourt at the trial or the messages (emails, letters, memos, etc) that were written by and to Harper's lawyer. Those documents didn't have Harper's make-believe-lawyer Robert Staley's name on them. They had Harper's actual lawyer Benjamin Perrin's name on them. That's because the lawyer who was involved - the fellow who advised the principals, who negotiated the deal with Duffy's solicitor, who sat in on the meetings, who consulted on strategy, who documented everything, was Benjamin Perrin. It was, likewise, Benjamin Perrin who "punched out" and hightailed it back to Vancouver when the scandal broke out.

But, most importantly, and for obvious reasons omitted from the PostMedia newsfiction, was Benjamin Perrin's take on Harper's integrity revealed in a statement Perrin issued during the last election declaring Harper "morally unfit to govern." I guess he saw things a bit differently than Robert Staley. Of course he would. Perrin was actually there.

For your amusement, here's the text of my email exchange this morning with PostMedia's Ian MacLeod:

Do you just pull this stuff out of your ass? What else have you got up there?

There were many documents before Justice Vaillancourt that were written by or to Harper’s lawyer only that wasn’t “Toronto lawyer Robert Staley.” The name on those documents was some Vancouver guy, oh yeah a law professor, by the name of Benjamin Perrin. You might remember Perrin from the last election when he released a statement denouncing his and, apparently, Mr. Staley’s former client, Stephen Harper, as “morally unfit to lead the country.”

Is this piece your idea of journalism? Is this the standard to which you aspire? I so hope not.

Well then Mr. Staley, whose article and affiliation with Harper is in papers across the country today, is attempting a massive fraud on the nation in broad daylight.

Either that or you are an arsehole.

I pick the latter.

Fair enough, Ian. There are plenty who agree with you.
Posted by The Mound of Sound at 10:12 AM

Well Mound, I pick the former. I also believe Mr McLeod can't be that stupid so it makes him part and parcel of the massive fraud Staley is attempting to spread on the nation in broad daylight.

That's exactly what Staley is doing, "attempting a massive fraud on the nation in broad day light." I think Mound the corporate owned MSM is getting a little uncomfortable with Harpers true character being exposed.I wonder why? Your letter put the pseudo journalist on the defensive.

It's also amazing Mound that whenever one of the Con supporters comes out to defend Harper, they have to out and out right lie.


It really is amazing. A friend called this afternoon to taunt me with the story of Harper's lawyer giving him the all clear. He was taken in, completely fooled. When I pointed out the Perrin-Staley problem this guy was stunned. He found it hard to accept that his paper, the National Post, had blatantly lied to him. However, with his memory tweaked, he recalled it was Ben Perrin, not Robert Staley who was the lawyer inside the PMO. I could tell he was embarrased to have been taken in so easily.

It's a deceitful piece, intended to mislead and distort public perception. I'm sure plenty of people fell for it.

However, as MacLeod observes, the Big Lie is in papers across the country which must mean that falsehood has been processed into truth.

Do all PMs have "private lawyers" no one knows about
.. or is this yet another example of the outlier who ruled Canada for the dark decade?

NPoV - my guess is that this guy stepped in after Benjamin Perrin realized he had to bail out and leave Ottawa which was about the time of the original email leak.

.. Beautiful .. ! Thanks for knocking the Robert Staley baloney out of the park.. Maybe he was one kf the brain trust crafting ambiguous denials for the harper beast.. 'I had no knowlege of these things' was a real winner - mealy and meaningless - all at the same time. Staley is just a spewer of hysterical revisionist Harper history.. I guess he can't recall Harper's everchanging attempt to recollect the political end times of his honorable pay Nkgel... who resigned.. no quit.. no was fired.. ...He should look up the definition of 'honorable' some day.. he sure has zero idea right now..