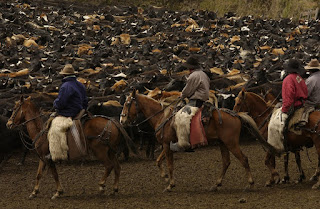 You don't read much about it but Canada is a big juicy target for landgrabs by foreign corporations.

A couple of years ago Argentinian officials were alarmed to discover an attempt by a Chinese company to purchase a vast swathe of prime ranch land. The government moved to block the sale. The Chinese investors did an end run by purchasing a controlling interest in an Argentine company that owned the coveted lands.

The Australian government on Friday blocked once and for all a bid that would have seen a chunk of its land the size of Ireland — or more than 1 percent of the country's total landmass — sold to a private Chinese company.

The company at first seems like an extremely unlikely contender to become not only Australia's, but the world's, biggest private landowner. It's called Dakang, and it was once a struggling pig-breeding firm until it was bought in 2013 by Pengxin Group, a Shanghai-based company mostly involved in real estate.

But ever since a massive tainted milk scandal effectively shuttered China's domestic dairy industry in 2008, companies there have been seeking to source dairy products from overseas, and Pengxin has been particularly pioneering, if not very successful, in the endeavor. In September, New Zealand nixed its plan to buy one massive farm there, and Pengxin subsequently canceled its plans to buy 10 more in the country. The company has bought vast farms in Argentina, Bolivia and Cambodia.

You might never know it by anything you've heard from a Canadian government over the past 20-years but the world is rapidly entering an era of severe food insecurity. Foreign land grabs plague Africa and Southeast Asia. South America has been targeted. New Zealand was targeted, now Australia. We're ripe for the picking.

China is in a mess. It has severe water shortages and a good bit of what water does exist is industrially and agriculturally contaminated, unfit for human consumption and unsuitable for growing crops. China also has a major soil contamination problem, the result of smokestack emissions, especially arsenic, cadmium, mercury and other persistent heavy metals.

Local climate change impacts compounding other forms of environmental degradation can endanger domestic stability. If your ability to feed your own population is undermined, you have to find that food somewhere and your supply has to be both adequate and reliable. That means you have to control the land.

It's time we had another one of those "adult conversations" Catherine McKenna recently spoke about.

When foreign interests divert agricultural production from nations where we already have a history of famine demanding international food relief efforts it usually occurs because of government corruption.

These are countries that often have weak or non-existent land registry systems which means that people whose ancestors have farmed a parcel of land since time immemorial can be displaced by a few armed thugs. That, in turn, renders them dependent on international aid.

I took an online course on global food security, University of Edinburgh as I recall, that revealed how extensive these landgrabs are in European industrial agriculture. For example, Brits want fresh strawberries year round. To stock the shelves the growers begin in British greenhouses but, as the seasons change, they "follow the sun" - first moving to Spain and then onward to Africa where they have large landholdings acquired, I suspect, for a song. Even British companies freely exploit food insecure nations such as Kenya.

Gradually most of the world becomes dependent on this type of agricultural food chain which, in the span of another decade or two, will be cataclysmic for the peoples of these poor and vulnerable "donor" nations.

I am curious as to what the problem is? In what respect do you think it improper for 'foreigners' to own land in another country?

Anyong said......It's a great way to take over and produce food for their own lot since China's land is so polluted, it has a difficult time producing food for its 3 billion. By the way, Canada would soon fill up with all sorts of trouble if everyone moved here that would like to call Canada home. Then there is India's 3 billion. Wow...imagine buying up Canada's land just to produce food for their people. Over population is a PROBLEM that no one wants to talk about. Especially the religious.

@ BGB - did you read what I wrote? Do you think that foreigners should landgrab as they're doing around the world today, especially in particularly stressed, food insecure countries? You should take a couple of days to explore the issue and I'll bet you won't need me to explain it to you.

Anyong, you overstate China's and India's populations by a factor of two. By 2030-2040 their combined population is expected (by some) to hit 3-billion.

Land grab is a land grab regardless of the use of the land.
Welcome to the Vancouver & "yellow peril."
A..non

Anyong said....I was being snide Mound.