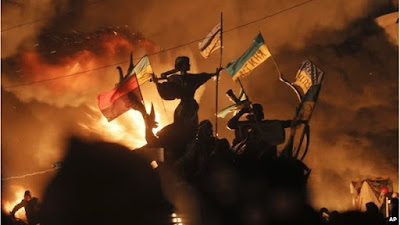 The easy answer is - nobody. Everybody in the West was solidly pro-Ukraine during the Euromaidan revolution that swept from power the country's elected, corrupt and pro-Moscow president Yanukovych. We were all chanting "Ukraine forever" as the country descended into civil war. We talked about war when Putin boldly annexed the Crimea territory.  Shifty Steve even gave Putin a face-to-face "Get out of Crimea" smackdown in Australia.

That was then, this is now. We were reluctant to acknowledge what Ukraine's critics were telling us but now we sheepishly accept that the post-revolution Ukraine government is hopelessly corrupt and in the iron grip of oligarchs with shady credentials. The hope for democracy in Ukraine is on the ropes, perhaps about to go down for the count.

In February, leading reformers in the economic ministry and the Prosecutor General’s Office resigned in frustration, accusing officials tied to President Poroshenko of blocking their efforts to rid Ukraine of the scourge of corruption. Although Poroshenko finally sacked his widely hated prosecutor general, Viktor Shokin, this was primarily thanks to growing pressure from Western officials. Even still, Shokin managed to do plenty of damage on his way out the door, firing his only remaining reformist deputy and forbidding prosecutors from referring cases to new anti-corruption institutions.

What’s more, Ukraine’s old guard — left over from before the Euromaidan revolution swept away President Yanukovych in 2014 — appears increasingly willing to subvert the country’s democratic development to silence critics. Using a much-criticized law enacted in February, President Poroshenko’s own party expelled two critical lawmakers from the parliament. The cabinet of ministers banned civil servants from criticizing the country’s leaders. Perhaps worst of all (and despite Shokin’s departure), the prosecutor’s office took a page from the Kremlin’s playbook when it used trumped-up charges of misappropriating American aid money to raid the offices of the Anti-Corruption Action Center, Ukraine’s leading non-governmental anti-corruption group.

On February 10, [IMF chief, Christine] Lagarde warned that Ukraine could lose aid if it didn’t take stronger steps to fight graft — but on the next day, she backtracked after what she termed a “constructive” conversation with Poroshenko. Biden also told Poroshenko to speed up reforms, but guaranteed another $335 million in aid during the same meeting. These kinds of mixed messages simply won’t cut it anymore. Western donors have already spent tens of billions of dollars propping up Ukraine. It’s time to use that leverage to force Kiev’s recalcitrant officials to implement the anti-corruption reforms its own citizens are demanding.

One of their top demands is fixing Ukraine’s horrifically corrupt judicial system. Only five percent of Ukraine’s citizens trust their judges — and no wonder, since so many take bribes. The Interior Minister even argued that the entire court system be shut down for three months while a new one is built from scratch. While this isn’t realistic, RPR has laid out an agenda for judicial reform that involves restructuring the courts and establishing new procedures for selecting judges and evaluating their performance. The RPR also proposesan agenda to reform the country’s prosecution service. The implementation of these or similar reforms must be an absolute condition for any further financial assistance for Kiev.

What to do? There's some suggestion that the U.S. should go back to its time-honoured approach and start meddling in Ukraine's domestic affairs again, this time by pouring money into the opposition. Sort of like the same thing they did when they intervened to topple Yanukovych. Maybe it'll be third time lucky.

I'll bet old Vlad Putin is getting a chuckle out of this.
Posted by The Mound of Sound at 6:58 PM

I wonder how much of that US "aid" ends up being routed offshore only to wind up in the world's largest tax haven - the US? Yet another way of transferring public money into the private hands of the .001%

I'm trying really hard, but, I can't envision Putin chuckling!! Maybe if he is in the middle of torturing someone!!

I find this analysis lacking. I've read a great deal on Ukraine in OTHER than the usual western MSM, and it's not a pretty picture. The neo-Nazis are in the ascendant, the IMF is complicit with the US in lending more money to the "government" while Ukraine still owes Russia $3 billion. The IMF acknowledges that Ukraine owes the $3 billion, but instead of forcing repayment before lending more, its standard policy, it says Russia can sue Ukraine in the London commercial courts. For this startling piece of flimflammery LaGarde got a five year extension to her contract as head OF THE IMF. Most of the money disbursed to Ukraine has for years disappeared up a corruption rathole.

The present government, which at least as is alluded to in the article, was a coup in Februry 2014 aided and abetted by the USA with cheers all around from Stevie, the ultimate twit.

I'm in no bubble singing the praises of Putin, yet I find the US is just as dirty dealing. Here's a non-inflammatory article that at least explains to some extent what's been happening in the Ukraine for the last few years. If anyone can refute what this ex-CIA man is saying with credible evidence, I'm all ears.

The IMF gave mmoney to this bunch?

The EU approved the Ukraine-EU association agreement. This was somewhat controversial, as the Dutch had voted in a referendum (initiated by a private citizen) to have the parliament not approve the deal (wiki on the vote), only for the Dutch parliament to ignore this, and also shut down any parliamentary debate on the subject until after the brexit referendum (according the right-wing british press, which despite their anti-euro bias, are not wrong on the facts of what occurred in Holland).

Despite a lot of public opposition, the Ukraine-EU integration project still has the support of European officialdom.