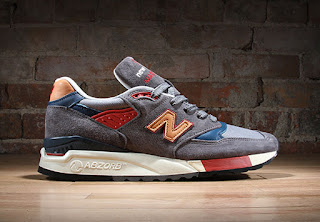 New Balance still manufactures shoes in the States unlike the competition that has long since departed for the world of cheap labour offshore.

The company claims it was bribed to keep quiet about the Trans Pacific Partnership and the devastation it could cause American industry. More specifically the company claims it kept mum for a year while it awaited the payoff - a big contract from the US military.
New Balance is struggling to be able to keep some of its manufacturing in the U.S. Currently New Balance makes shoes in five factories in the U.S. Their executives say if TPP passes, lower tariffs on shoes made in places like Vietnam will force them to close their U.S. factories.

… If the President gets his way and TPP passes, the tariff on non-U.S.-made (Vietnam) shoes will end and New Balance – like so many other companies struggling to manufacture inside the U.S. – will have no choice but to end its U.S. manufacturing operations. Meanwhile Nike, already manufacturing in Vietnam and Malaysia and currently selling shoes that cost $10 to make for over $100, will gain even more of an advantage, which obviously will not be passed on to consumers. If you are able to get a certain price for a product, why reduce it?

These reports, if authentic, would make Barack Obama the High Priest of Neoliberalism. Somehow that's hard to swallow and yet we know that the White House is pushing the TPP.

Why do leading politicians want these awful trade deals? They are so destructive. They don't seem to be learning that the ideology fails.

Now we have our own CC "capitalizing" off the TPP how it will create some 800 million new potential customers-markets. Makes for yet another election 2017 stop and photo op, but actual markets, that's about as true as the 100,000 LNG jobs and this magical $100 trillion-gazillion borrowed money prosperity fund. However, bullshit sells and we keep lapping it up, so TPP will be forever branded a good idea in the minds of the masses, including those who will lose their jobs at New Balance as this "cheap labour" deal unfolds.

The Liberals have bought into the Neoliberal agenda Mound. They will ratify the TPP.

Anyong says>>>>is the following reasonable? Boycott buying shoes, runners and the like made in foreign countries.

@ Toby - "why" you ask? It seems counterintuitive, no question. Yet what you're really seeing is the "political capture" aspect of neoliberalism at play. In the corrosive course of neoliberalism, capital increasingly insinuates itself between the voters and their elected officials. Part of this derives from outright corruption but a very large part of it traces to the surrender of sovereign power through trade agreements.

This is plainly the rise of illiberal democracy which, unless it is checked and reversed, leads to undemocratic, authoritarian rule. That it has gotten so far in such a relatively limited time demonstrates how complacent we, the electorate, have become.


@ BCW - yes, Crusty is in the bag to neoliberalism. She always was. She sees her role as chairing a provincial Chamber of Commerce. Then again we elect her but our hapless NDP also has a lot to atone for.

In fairness to the Liberals, Pamela, I think our entire political apparatus is neoliberal at heart. It's a contagion that, once in place, is hard to shed and requires leadership on a scale we haven't seen in Canada in decades.

@ Anyong - yes we can boycott foreign made goods (Israeli goods excepted). We can but the past shows that these boycotts are very hard to make work. Too few people can be bothered even if they did know the products and brands they should reject.

There is a smartphone app called "buycott" that lets you scan the barcode to confirm whether something is on your list of companies or countries you wish to avoid.