Really, the Republicans Want This Dick Head for President? Really? 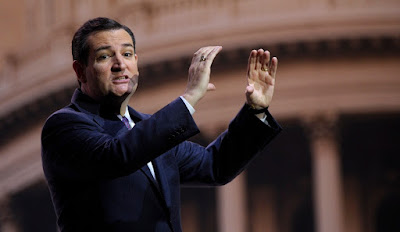 
Cruz's legal team asserted that "obscene devices do not implicate any liberty interest." And its brief added that "any alleged right associated with obscene devices" is not "deeply rooted in the Nation's history and traditions." In other words, Texans were free to use sex toys at home, but they did not have the right to buy them.

The brief insisted that Texas, in order to protect "public morals," had "police-power interests" in "discouraging prurient interests in sexual gratification, combating the commercial sale of sex, and protecting minors." There was a "government" interest, it maintained, in "discouraging…autonomous sex." The brief compared the use of sex toys to "hiring a willing prostitute or engaging in consensual bigamy," and it equated advertising these products with the commercial promotion of prostitution. In perhaps the most noticeable line of the brief, Cruz's office declared, "There is no substantive-due-process right to stimulate one's genitals for non-medical purposes unrelated to procreation or outside of an interpersonal relationship."

You got it and, if the Republican establishment has its way, he could just become the next POTUS.

Seriously; this dick head is the American ISIS.
Think W III , sand turned to glass!
This guy is really frightening; Trump is a saviour ( pardon the pun) compared to Cruz ( as in missile)

The Zodiac Killer is definitely scarier than Trump...