Imagine a cubic kilometre of ice water. That's a gigatonne, one billion metric tonnes of water. Here's the kicker - in a single day. It happened on the Greenland ice sheet this month. See the blue spike below? Scientists couldn't believe it was true - until they checked. 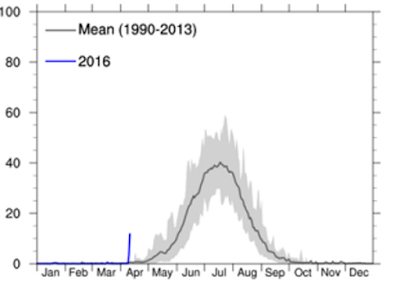 "Everything is melting", said Aqqaluk Petersen, a resident of Nuuk, Greenland's capital.

The heatwave, Greenland style, added to other evidence that the top of the world continues to warm about twice as fast as the rest of the planet.

"Greenland is really the big show when it comes to ice melt," said Matt King, Professor of Polar Geodesy and an ARC Future Fellow at the University of Tasmania. "It's probably losing as much ice as all the small glaciers around the world combined, and probably more than Antarctica.

"Greenland is being eaten away from away from above and from the edges."

Since satellite records date only from the 1970s, some natural fluctuations may be in play, he said. Still, Greenland's early April warmth was consistent with other signals of a warming planet.

"Such a big spike in melting so early is in complete agreement with what you'd expect when we heat the atmosphere so much," Professor King said, referring to the impact from humans burning fossil fuels and releasing other greenhouse gases.

The evidence is in, Mound. The disaster is is no longer moving at a glacial pace. The glaciers offer proof of that.


Yes indeed, Owen. The only aspect that remains glacial is our response to what is overtaking us.