America is "Far Bigger" Than Trump 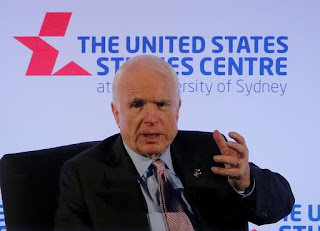 Donald Trump has many problems, one of the biggest being some old dude from Arizona. That would be Republican senator John McCain.

McCain must recall the oath he took as a U.S. naval aviator to defend the Constitution against  "all enemies, foreign and domestic." It seems pretty obvious how he views his nation's chief executive. That would be the same draft-dodging pile of refuse who mocked McCain's courage while held in captivity at North Vietnam's "Hanoi Hilton" prison camp.

The senator sees what Trump does not - that America's essential alliances, from Asia to Europe, across the northern and southern hemisphere, are unravelling. He sees China eagerly picking up every shred of influence, power and loyalty that Trump is so stupidly discarding.

And so McCain is riding to America's rescue. His message is "please don't give up on us just because of that idiot."

Donald Trump’s administration is mired in scandal, senior republican senator John McCain has said, but he urged America’s allies to stand by the nation as it navigates “troubled times”.

In a speech in Sydney, Australia, McCain said the US remained the most important country on Earth, and the global defender of “truth over falsehood”.

“My friends, I know that many of you will have a lot of questions about where America is headed under President Trump. Frankly, so do many Americans. What I would say is that the new administration is just that – new. It is still finding its feet.”

McCain conceded America’s reputation had suffered in the early months of Trump’s presidency as scandals over ties to Russia, alleged obstruction of an FBI investigation, nepotism and foundering relations with other world leaders rocked the administration with crippling regularity.

“We are going through a rough period,” McCain said. “We really are, and for me to tell you that we aren’t, politically, is not fair. But we’ve gone through other troubled times. I can remember the Watergate scandal and how it brought down a president. I’m not suggesting that’s going to happen to this president, but we are in a scandal and every few days another shoe drops from this centipede, and we’ve got to get through that.”

What, a "centipede"? A human centipede. Wait, I thought there was a movie about that. Haven't seen it. Don't intend to. Never, ever.

McCain concluded his address with a plea to Australia and other US allies to “stick with us”. He said: “We need your help, my friends. Now more than ever.

“I realise that some of President Trump’s actions and statements have unsettled America’s friends. They have unsettled many Americans as well. There is a real debate under way now in my country about what kind of role America should play in the world and, frankly ... the future of the world will turn on a large extent on how this debate in America is resolved.”

Poor John, he just wants to get this Trump mess out of the way so he can get back to his favourite pastime, demanding that America bomb the hell out of some distant place.

Wasn't McCain the guy who thought Sarah Palin was VP material? But Trump is a bridge too far? C'mon John, that's enough wandering on the front lawn, time for your meds now.


Maybe McCain doesn't want to compound his foolish mistake, one that sank a presidential campaign, with an even greater mistake, one that threatens the post-war consensus and, with it, America's standing for the foreseeable future, perhaps for decades to come.

Bit of a distinction there, Cap.

Let me know when McCain's votes match his words.