So, Are We Just Going to Take This On the Chin? 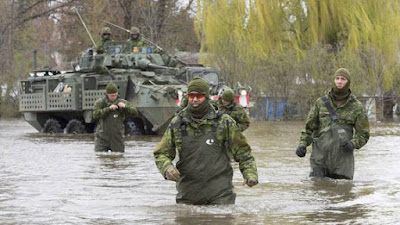 From Ontario to Quebec and all the way back to British Columbia's Okanagan Valley we've been experiencing severe flood events.

A new study published in the journal Nature concludes that, for every degree fahrenheit the planet warms, these floods will worsen in severity by upwards of 15 per cent. Basic physics. Warmer air holds more water vapour that creates more rainfall deluges. At the same time our now wonky jet stream can park these monsoon rains over one area for days on end.

Canadians got a taste of this with the Toronto and Calgary "once in a century" floods of 2013. That should have ended any doubts that our 20th century infrastructure was up to the demands of our 21st century climate.

When "once in a century" storm events start to come along every decade we've got a problem.  Those floods cause a lot of damage - to homes and to infrastructure. If you suddenly find your dream home now sits in a 21st century floodplain it may become your nightmare home.

There's a small neighbourhood in my little town of dream homes built where the Englishman river meets the Pacific. There are times when an early mountain snow melt combines with sea level rise and "king tides" that overwhelm those homeowners.  Severe flooding becomes an annual or bi-annual event.

There's no insurance for that sort of loss. You're on your own. You could sell and head to higher ground - if you could find someone who wants to buy. Good luck with that. The municipality won't issue building permits for the area any longer. You can't even get a permit to put up a garden shed. You are S.O.L.

So, what are we going to do about it? Federal and provincial disaster relief only works for the rarest of disasters. Governments can't afford to make good such losses on a regular, if periodic, basis.

So what's the plan? I don't have a clue. The only thing quieter than a flooded basement is the silence we're getting from our political caste.

Anyong....." The only thing quieter than a flooded basement is the silence we're getting from our political caste." That is how they want it. They don't want the population to wake up one day and realize they have been had. Can you imagine millions of people demanding something been done about "human made climate change"? Plus, allowing this situation to continue will cause millions of deaths without having to lift any weapons. Is there a problem with that? Of course!

These floods are a prelude to the main events along our coasts.

Just saw a stat: 432 people own half the land in UK.
If we survive climate change let's hope we ditch the whole concept of private real estate and learn to share.


Maybe we'll revive the "Jubilee Year" where, every 50-years, all land is redistributed, equitably, and all debt forgiven. In "The Collapse of Globalism" John Ralston Saul wrote of the time when ancient Athens found itself debtbound. The economy had become moribund with too many creditors chasing debtors who had no means to make good their debts. The city state itself was imperilled until it was decided that all debt should be cancelled, forgiven, wiped clean off the state. With that the economy took off again. The poor were able to buy goods again and the wealthy were able to sell their wares once again.

It is interesting to look at maps of where sea level is expected to rise and where streams are flooding. The endangered areas are mostly fill, places where developers "reclaimed" land to build upon. As with so much else, governments allowed, even encouraged such moves but they remain silent now that we are reaping the results. Mother Nature is taking it back.

The Toronto floods would have been much worse if not for a far-sighted decision taken in 1954 after Hurricane Hazel hit the city. At that time, the conservation authority bought up more than 120 homes near the Humber River, bulldozed them and turned the floodplain into parkland. Since then, development near the city's floodplains is severely restricted and they remain parkland.

I'm afraid this is the way other Canadian cities are going to have to go. They need mandatory fair-market-value buyouts of all properties in flood-prone areas. The voluntary buy-outs offered in Alberta only saw about a third of property owners take up the offer, which doesn't fix the problem of getting people out of there. Allowing people to rebuild "at their own risk" also doesn't fix the problem, since public authorities will still be stuck with future "rescue" bills and bills for police to prevent looting of damaged homes.

Unfortunately, cities and towns can't be left to foot the bill because they have neither the money nor the tax base to do so. You also don't want towns taking measures to protect themselves at the expense of other towns and cities. This means that flood management has to be taken up, and taken up aggressively, by the provinces, and if needed, by the feds. That won't happen as long as we continue to deny there's a problem.

The problem I have with your proposal, Cap, is that you would have cities compelled to buy out flood plain owners at "fair market value." How do you define that? Due to its new susceptibility to periodic flooding there is no significant fair market value.

What do you do when the next significant issue occurs, such as sea level rise? What if the "normal" multi-decadal drought returns to the prairies and forces that population to relocate? Where do you draw the line? This buy out option is only feasible for isolated instances involving a limited number of homeowners. It is not inherently scalable.

No I think that idea is fraught with problems.

Municipalities extract huge taxes from those that live in scenic areas that are quite often exposed to the wraths of climate disruption.
Ocean fronts and river views are the most at risk.
Should we stop scenic waterfront real estate development?
Should we bail out those that can afford it when the rain falls and the sea rises?

The Year of Jubilee is a fine principle.

Yeah, LALI, although it would seem utterly radical to most of us today.

Yes, I know it's an Old Testament principle. But the song remains the same...

He was that, LALI, until organized religion cleaned him up, sanitized him.

Sanitized the love right out of Him, din't they?

For their own selfish, greedy, prideful reasons.

Hey Mound, next time you're down at the lake with your brother, maybe you could take a spin up here on the Grand, and we could ask a few others to join, for a meet-in.
Thoughts?

I don't know when I'll next be in Ontario, LALI. I am getting pressure from the relatives to show up. It's been years. Truth be told, I rarely leave Vancouver Island.

Oh, please do if you can. We only go around once, right?
It'd be fun and illuminating.

Anyong.....Every aspect of how we live is at risk, and on the eve of walking off the cliff, developed nations including Canada are asking: have we catastrophically screwed ourselves? There isn't any doubt that we have.