Caesar Was Felled in Minutes. Trump May Take a Little Longer.


It really is a lot like handing your 16-year old the keys to a brand new Corvette and telling him the only traffic signs he has to obey are those he likes.  That, to me, is an apt metaphor for the first four months of Donald Trump's presidency.

Will he be impeached? I don't know and I don't know anyone who does know. The skeleton of impeachment is certainly there but it has to be fleshed out. Someone has to put meat on those bones. Someone, perhaps, like special counsel Robert Mueller.

There is far more to this than the Comey and Flynn affairs.  It resembles nothing so much as this ball of mating garter snakes. 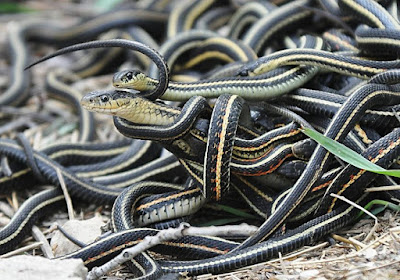 Now, in that ball are plenty of snakes who have suddenly become worried about their personal well being. These are people who are going to be lawyering up as they try to figure out if and when to cut deals with investigators. Trump has already been gored by leaks. He demands absolute loyalty but, as he's shown with Flynn and Comey, no one can count on loyalty from Trump. Those who choose to rat him out to save their own skins might find they have to take a number.

And so today Trump begins his first foreign trip as president of the United States. He'll swing by Saudi Arabia, Israel, and the Vatican before moving on to the Nato summit and then the G7 leaders conference. And he's traveling under a cloud, the cloud of a wrecked and wounded presidency and the spectre of impeachment. Think of it as the Schadenfreude Tour.

And he's only into four months of his mandate.

I believe tRump will exit the Presidency in January 2021.

That said - be careful what you wish for. Installing Pence now likely means big wins in 2018 and again in 2020 for the Republicans.

Best case scenario would be to see a long drawn out Trump impeachment in 2019 assuming the Dems don't f.u. the 2018 elections. (ie rather than run against tRump like Hilary did they need to run FOR something.)