When Does a Carbon Tax Work? 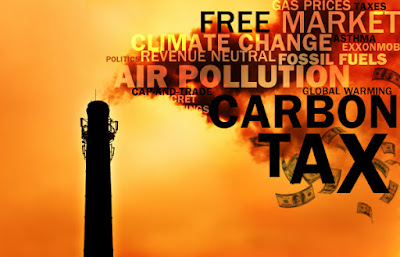 When it comes to carbon taxes, it's all about pricing. The purpose of the tax is to discourage consumption of fossil fuels thereby reducing greenhouse gas emissions. It seems to work, sort of, but carbon taxes are hindered by a lack of political will, a.k.a. cojones.

So where to set the carbon tax/price bar? According to two influential economists, Nobel laureate Joe Stiglitz and Britain's Nick Stern, a hundred U.S. dollars a metric tonne should do it.

A hun per tonne. That's enough to send Rachel Notley, Brad Wall and, yes, Capt. Selfie into terminal apoplexy. Their blood would boil until their eyeballs popped.

A tax of $100 a tonne would be needed by 2030 as one of a series of measures to prevent a rise in global temperatures of 2C.

In a report by the High Level Commission on Carbon Prices, which is backed by the World Bank and the International Monetary Fund, they suggest poor countries could aim for a lower tax since their economies are more vulnerable.

The aim of a tax on carbon would be essential to meet the targets set by the Cop21 Paris Agreement in 2015, they said.

Wait a second. Our then freshly minted Liberal government was instrumental in formulating that 2015 Paris climate accord.  Justin and Cathy went to the City of Lights to proclaim that "Canada is back." They squeezed every drop of political capital that they could out of that performance and the world cheered them on.

That, of course, was before Canada's enviro-duo said "bugger that, we've got bitumen to sell," at which point all their credibility was rapidly flushed down the political crapper, their false majority government.

There is a way for Justin to redeem his enviro-cred, an export carbon tax on bitumen. Figure out how much greenhouse gas will be emitted from the processing, transportation and end use of that energy and tax it, per tonne, right on the dock. And no cheating. You have to tax the carbon bomb hidden in that bitumen, the pet coke, the high sulphur/high carbon granular coal that comes free with every boatload of bitumen. The end user is going to burn that crud sure as hell and Justin needs to tax every kilo of that stuff.

And what do you think the chances are of any of that happening?

Not a chance. The screams would drown any government that tried it.

I understand that the Americans are still subsidizing coal even though consumption has been dropping for years. In like manner, Ottawa will be subsidizing oil and gas when we are all driving electric cars and have solar panels on our roofs.


You're right Toby. They'll just keep going until they're stopped. That's on us.

An effectively high carbon tax would negatively impact GDP growth. So the Govt won't do it. Gotta grow the GDP.