The State of the Planet - Kofi Annan 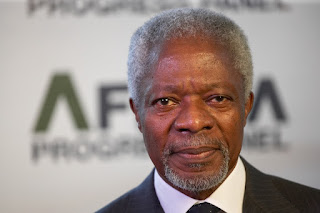 Some think of him as the finest Secretary-General in the history of the United Nations (1997-2006). He wasn't just a servant of the member states but an advocate for people and for our planet. It's fitting that Kofi Annan address the State of the Planet before tonight's Prix Pictet awards for photography and sustainability.


We are running out of space. Fly over Africa at night and you will see mile after mile of fires burning red in the dark as scrub is removed to make way for human beings. Satellite images of nocturnal Europe or America show vast areas lit up like an enormous fairground. From Shanghai to Sydney, from Moscow to Mexico City, the skylines of our major cities are no longer fixed and familiar. Where we cannot build into the sky, we construct vast chequerboards of smogbound, low-rise dwellings that stretch from one horizon to the other.

Our cities expand in every direction as we fight to house a population that is growing at the rate of 200,000 each day. That adds up to a headcount the size of Germany every year. To feed this growing number requires ever more land to farm: each year, more than 150,000 square kilometres of natural forest are lost to agricultural or urban development.
...

The greatest unexplored space on our planet lies beneath the oceans. Yet rising CO2 levels in the atmosphere are causing acidification, which disrupts food chains and marine habitats. Huge floating masses of plastic dumped in the oceans turn into hazardous waste that endangers not only marine life but also, indirectly, human populations – and the planet itself. Overfishing, illegal and damaging trawling practices and past whaling have emptied the oceans before we have even properly understood what riches they contain. And the great spaces of the oceans are the lungs of the planet.
...

The very air we breathe is filling up with toxins. For years, gases have burned through the ozone layer, exposing us to ultraviolet rays and affecting climate change. Airborne diseases – such as Zika, swine flu and bird flu – have multiplied and threatened to become global pandemics.

Great clouds of smog hover above our cities and airborne diseases multiply. Inhalation of toxic gases is said to reduce average lifespans by one to two years. Various estimates suggest that air pollution accounts for between half and two-thirds of all premature deaths in Asia, while anywhere between 10 and 20% of all worldwide deaths are attributable to the same cause.
...

Annan describes a world run amok, a world gone mad.  Yet it's a madness that those who hold the reins of power, who rule on our behalf, are intent on perpetuating for they see, or choose to see, no other course.

To see some of the photographs in this year's competition and those from past years, visit the Prix Pictet website.

So what's next?
Mandatory sterilization of 98% of the world's population?
A formal declaration of International Martial Law on the part of the World Court?

Quite a tall order, given the obsession with "human rights" and the way such an order stands to officially "violate" such.

We probably wouldn't have to be that extreme. Have you noticed that wherever women have rights to health, education, birth control (including abortion) divorce, jobs, equal pay, etc that they have fewer children? Have you also noticed that large families haunt places where poverty and male supremacy abounds? Canada could start by refusing to aid, in any way, peoples and countries that suppress women. We could also stop supporting any religious organizations (the usual purveyors of male dominance) and corrupt countries in which any foreign aid is seen as a revenue stream for the power structure.