To Americans He's Pompous. To Russia, He's a Giggle. 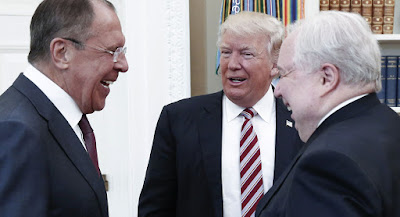 To Russians, high and low, America's new president is a laughingstock.

U.S. democracy may be facing one of its toughest challenges in hundreds of years, but for Russia, this is a time for heaping servings of schadenfreude. After decades of hectoring from Washington on issues such as unfair elections, a clampdown on the press, and widespread corruption, Moscow is happily watching chaos and scandal embroil the Trump administration. The more lawless Washington appears, the more Russians are howling with laughter. When Trump tweeted last week that Russians must be “laughing up their sleeves” at the United States, he wasn’t wrong, exactly — though the target of Russian laughter might not be quite what the U.S. president thinks.

Some of the joking comes in the form of Saturday Night Live-style political comedy. The Russian comedian Dmitry Grachev, for instance — known for his chillingly accurate impression of President Vladimir Putin — regularly heaps scorn on Trump while in character. In a widely viewed clip mocking the leaders’ first telephone conversation, Putin is handed a mobile phone and told Washington is on the line. “The what house? I didn’t recognize you,” he tells the supposed leader of the free world. Various impersonations of Trump are also beginning to appear on Russian television, which typically depict the U.S. president as a buffoon who gets outfoxed by Moscow. In March, the popular Russian TV show Comedy Club, shown on the youth-focused channel TNT, featured an actor as Trump. The ersatz Trump thinks former U.N. Secretary-General Ban Ki-moon is a type of sushi.

But it isn’t just comedy programs. A remarkable number of jokes at America’s expense are coming from official Russian sources.

Last week, in a subplot to the Comey firing, Russia’s state-run TASS news agency was allowed in the Oval Office to photograph the meeting among Trump, Lavrov, and Russia’s ambassador to Washington, Sergey Kislyak — while the U.S. press was excluded. After the meeting, the Russian Embassy in Washington used the social networking service Storify to create a tongue-in-cheek “caption contest” for one of the TASS photos: a large image of Trump shaking hands with Kislyak. Meanwhile, the White House fumed at the Russians’ public release of the photos, which Washington claimed were for official use only.

Even in Trump's inner sanctum, the White House, Russian foreign minister Lavrov couldn't help taking the piss out of the Great Orange Bloat.

Last week, while he was in Washington to meet with President Donald Trump and his American counterpart, Russian Foreign Minister Sergei Lavrov decided to take a moment to crack wise.

The town was up in arms over Trump’s recent firing of FBI Director James Comey — there was talk of little else. But during a brief appearance before reporters with Secretary of State Rex Tillerson, Lavrov pretended to be in the dark about the sacking.

“Was he fired?” Lavrov deadpanned, in response to a question. “You’re kidding. You’re kidding,” he said, his lip slightly curled in a smirk.

It was an unscripted moment, both playful and cutting. But it also served to give Americans a brief window into how Russia views the unfolding chaos of the Trump presidency: Russians, it turns out, think this is all sort of hilarious.

After the collapse of the Soviet Union a quarter-century ago, the jokes petered out for a while after authorities lost their grip on power, said translator and Moscow Times columnist Michele Berdy. But dark humor is back — only this time, even as Russians take snide pokes at their leadership (“Putin shows up at passport control with Poland. ‘Nationality?’ he’s asked. ‘Russian,’ he says. ‘Occupation?’ Putin smiles. ‘Not this time — just a short business trip’”) they’ve turned their humor toward overseas targets. And this time, the Russian elite look as if they’re in on the joke — a celebration of their seeming moment of triumph, Berdy said. It’s “the kind of cocky joking of people who feel on top and don’t care if they offend,” she said. “Or are happy to offend.”
Posted by The Mound of Sound at 9:34 AM

Trump will never understand where the humour comes from, Mound.

It's not just Trump.
Americans are totally different from the western world.
Until we make allowances for that we will go no further forward.