Don't Worry, Be Happy. We've Got Kinder Morgan's Word, After All. 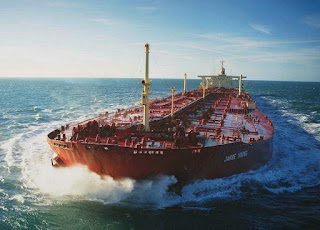 A dandy little interactive piece from the Globe & Mail showing how bitumen-laden supertankers will navigate through British Columbia coastal waters.

People who know better won't be impressed but the Globe has always been pro-pipeline, pro-tanker. The least assuring part of the presentation is the rosy Kinder-Morgan assessment sounding the "all clear" on the expansion. That may be why the paper has left out a few points.

One critical point left unmentioned - bitumen. While we're given Kinder Morgan's assurance that a spill is almost impossible, well that's bullshit from the American company intent on pushing its pipeline through to "tidewater." There has been plenty of testimony from experienced mariners including Canadian Coast Guard and Royal Canadian Navy types that predict a spill isn't a matter of "if" but "when" and "how often." Let's cut that in half - a spill is possible if not probable.

A spill of bitumen. Nobody wants to talk about bitumen or dilbit which is what is going in those tankers.

Kinder Morgan and the Globe don't want to get into what happens when dilbit gets spilled into our coastal waters. They pretend it's going to be, worst case, like the Exxon Valdez catastrophe. And, while that was a catastrophe and still hasn't been cleaned up, that was conventional crude oil, not bitumen, not dilbit.

Everybody - the feds, Notley, the oil patch, the pipeline gang think it's just dandy to push this toxic sludge through British Columbia waters.

Nobody - not Peter Kent, not Joe Oliver, not Justin or Cathy or Garneau, not Notley and certainly not Kinder Morgan - can walk on water or prove that dilbit can either. It sinks. The diluent, the light oil, separates and the really toxic bitumen, heads straight to the bottom. They imply that the stuff floats, like the Exxon Valdez oil, but they can't and won't prove it. If they could they would if only to silence their critics.

When he was enviromin Peter Kent was asked if the government had any technology to clean up a dilbit spill. He replied, "no, but we're working on it." Apparently Kent didn't get very far and neither did his successor, Dame Cathy. That much was obvious when the Liberal government's environment ministry authorized the use of Corexit as an "oil dispersant."

Their solution, Corexit. Fuck me, Corexit. The feds, Justin's team, have authorized the use of Corexit as a spill response. You see, Corexit doesn't disperse oil, it sinks it. It's the "out of sight, out of mind" solution to oil spills. Corexit was used at the Exxon Valdez disaster and the Deepwater Horizon catastrophe. It doesn't just harm the environment, it maims and even kills those who come into contact with it. Check this out. Yet those bastards in Edmonton and Ottawa think Corexit is just the ticket. Or go here to read the warning labels from the manufacturer.

Corexit is the federal government's admission that when a dilbit spill occurs their plan is to sink it to the bottom where pretty much all the marine life that sustains the oceanic food chain originates. Kill that off and you can kill off most of the marine life between the bottom and the surface - for decades and decades. The Exxon Valdez wasn't bitumen. Neither was the Deepwater Horizon. They were relatively benign crude oil and they remain environmental disasters to this day.

Justin, Rachel, Cathy and Christy - they've all got a raging hard on for this project just like their predecessors. Would you want that stuff, a product whose manufacturer warns, "Do not contaminate surface water," in your river or lake or pond? Would you want your kids or grandkids to swim in Corexit-laced water? Would you want to eat seafood that's been swimming in Corexit and bitumen contaminated water? If you would, well, you would be a moron.

But don't worry, be happy.

And when a right wing newspaper from Phoenix, Arizona reports that Kinder Morgan has the worst safety record of any other pipeline operator in the US of A, then you know we have a serious problem with this Kinder/politician love-in. And that was at least 10 years ago that I read that article!

Hey
I read an interesting article when getting physio today (aging body - tennis elbow) about nearbit....
I think it was in the Walrus - online I found this

Rail can quickly be converted to other use, unlike investing in pipe.

I hope Stanford's Tony Seba is right and these mfers end up building a pipeline nobody wants to use. Never forget who is behind Kinder Morgan and what his past history is.

I said a year ago that I had my money on tonyseba.com. The pipeline will never happen.