Brace Yourself. It Might Be Getting Hotter Than Expected. 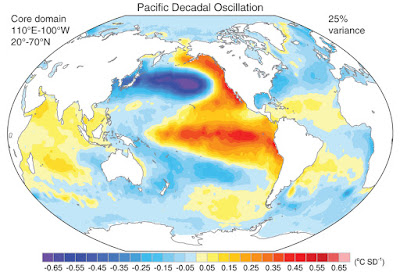 By now pretty much everybody understands the "greenhouse effect." Greenhouse gases, primarily CO2 and methane, released into the atmosphere trap solar energy just like a greenhouse and the Earth gets hotter.

There are other components to global warming. The loss of Arctic sea ice is the most obvious. The white reflective ice and snow melts exposing the dark ocean waters beneath. Dark water absorbs more solar energy than ice. The Arctic Ocean then warms which warms the atmosphere immediately above it.

Now scientists warn that another heating component is about to come into the mix, the IPO. That's the acronym for Inter-decadal Pacific Oscillation. We don't tend to think of the vast Pacific Ocean as a heat repository yet that's what it is.

For a decade or two, the Pacific may absorb atmospheric heat and, due to winds and currents, it takes that heat into the ocean depths. The first law of thermodynamics provides that energy remains a constant and, while it can be changed from one form to another, energy can neither be created nor destroyed. In other words, atmospheric heat has been absorbed to become oceanic heat, but that heat energy remains and, in this case, it remains in the Pacific depths.

[A] paper by Melbourne University researchers, published this week in Geophysical Research Letters, argues the preceding negative phase - lasting from 2000-2014 - may have provided a "temporary buffer" for surface temperature increases and "cushioned the impacts of global warming on extreme events, such as heatwaves".

"A turnaround of the IPO to its positive phase could initiate a period of accelerated warming over the next one or two decades," Ben Henley and Andrew King state. "This would likely lead to the Paris target of 1.5 degrees (warming since pre-industrial times) being surpassed within the next decade."

And so, while the Arctic continues to warm, releasing as it does ever more methane and CO2 into the atmosphere; and as the greenhouse gas concentrations continue to grow from our consumption of fossil fuels; we're also going to be hit by the release of heat stored in the depths of the Pacific Ocean.

And, of course, the other part of the equation involves how rising ocean temperatures affect sea life, Mound, as I'm sure you well know. https://www.thoughtco.com/global-warming-effect-on-marine-populations-1434916

And a warming ocean results in lowered oxygenation, compounding the threat to fish and other marine life from algae blooms, dead zones and such. We have taken the oceans for granted, unable or unwilling to regulate the international fishing fleet as it fishes one species after another to commercial extinction. We have failed to prevent industrial and agricultural discharge into our oceans, lakes and rivers. We've created floating seas of plastic debris. As a civilization we've fallen deaf just as the alarm bells are sounding. It's a damned mess and almost nothing is being done about it. That is hubris on a planetary scale.

Individuals think; groups don't. The larger the group, the dumber it is. As an individual I'm scared of what's coming, particularly for my grandchildren. Observing the groups, large and small, that I participate in I see very little attention. As to the 7.5 billion, there is almost no thought at all and no intention to change.
________________

Canada's Defense Minister better pay attention. Instead of worrying about stress in the rest of the world he needs to pay attention to the defense of Canada. As you pointed out, Mound, we need bases in the North. However, global warming is going to create stress to the south of us. My fear is of major failures (crop, water, etc) in the US and some of those good old boy militias (armed to the teeth) doing Ethan Allen raids across Canada's southern border. Canada's military is unprepared to stop that.

Have you read The Road by Cormac McCarthy?

Anyong....12:01 PM ...that is also part of the answer to the Atlantic problem with reduced production of oxygen....it was producing 18% of the worlds oxygen. So far, by a 6% reduction as photo-plankton is severely hampered by CO2 changing its form. This coming from NASA who are based in Newfoundland presently studying the situation.