In Defence of the Deep State. 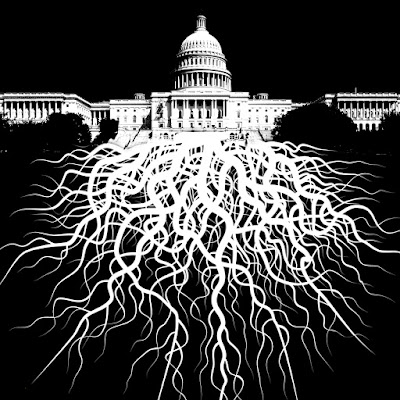 To some, conspiracy theorists and those with a feeble understanding of governance, the Deep State is a sinister group of powerful insiders manipulating the strings of government for devious ends.  If you insist on believing that, this would be a good time to go to another blog or web site.

To me, the Deep State is something else. It is the institutional memory of government, the muscle memory, without which government cannot function. It exists, at times defiantly, because it is indispensable. Today when elected representatives routinely put partisan and special interests ahead of the public interest and the good of the country, the Deep State can be the last redoubt of liberal democracy.

The Globe's Lawrence Martin writes that this dreaded Deep State may be America's only effective counter to its president.

We’ve been hearing that potent term, relatively new to the political lexicon, a lot lately. It has different shades of meaning but generally denotes an entrenched natural governing elite. Conservative governments in Canada, notably John Diefenbaker’s and Stephen Harper’s, feared they would be undermined, though the term wasn’t in use then, by a hostile deep state in the form of a liberalized bureaucracy, media and foreign service.

In Ottawa, you might find the deep state’s charter members in leafy Rockcliffe Park neighbourhood; in Washington, in the cozy conclave of Georgetown, where the establishment forever has been moored.

Georgetowners were predictably appalled by the onslaught of the rubes and the rabble. But much of the fear on these narrow stately streets has already lifted. Against the infidels, the long-rooted Washington establishment is holding strong. The deep state is winning.

The renegade Trump administration becomes more conventional by the week. Much of foreign policy has been given over to Foggy Bottom traditionalists. Threats against immigrants have been pared down. The Steve Bannons in the administration are losing their clout. Trade threats have diminished, meaning Canada need not panic. For the NAFTA renegotiation, Ottawa holds some good cards and has a foreign minister in Chrystia Freeland who knows what she is doing.

The Washington bureaucracy, liberalized under Barack Obama, has played a big role, especially through leaks, in the deep state resistance. But the most powerful element has been the bold resurgence, chiefly in the form of The New York Times and The Washington Post, of a traditional mainstream press thought to be in decline.

The Post and Times have hit this White House with one news jolt after another. It’s like they’re back in their heyday of the Pentagon Papers and Watergate. Chiefly as a result of their work, a special counsellor is now probing the Trump administration’s Russia ties. Comparisons to Watergate are premature and overheated. But it is worth remembering how the deep-state institutions of the day brought down Richard Nixon who, like Mr. Trump’s political base, railed against eastern elites.

“Of course, the deep state exists,” former Republican House Speaker Newt Gingrich says. “There’s a permanent state of massive bureaucracies that do whatever they want and set up deliberate leaks to attack the president.”

Says Mr. Trump of the media: “No politician in history – and I say this with great surety – has been treated worse or more unfairly.” His cause would perhaps be helped if in his first 119 days he hadn’t, as the Post reports, made 586 false and misleading claims.

Coinciding with the newspaper muscle-flexing has been the fall of Fox, the President’s media enabler. Fox has been hit by scandal, the departure of top talking heads and the death of its architect, Roger Ailes, who pandered to prejudice like none other and polarized the country in so doing.

The Trump Republicans are not caving to establishment forces on all fronts. The head of the Environmental Protection Agency stands for environmental destruction. The Attorney-General is a lock-em-up lawmaker with a bigoted background. Obamacare is threatened by an appalling piece of House legislation.

But chiefly owing to a robust free press, this administration is being held to clear-eyed account, an account that is allowing the forces of normalization to make headway. If that’s what a deep state is about, the United States should be happy it has one.

.. this is a Hindenberg Administration
one half of a collision or explosion
seeeking the other half..
At best it will turn out to be..
a convocation of clowns, fools
and downright dirty twisted creeps.

But there are comedic moments..
not just from the dumpster trumpster
but from his 'brain' trust or 'drain' th swamp fakers

.. hopefully you didn't hurt yourself laughing..
at the Frump Trump's pick as Secretary of Commerce ..
The guy so impressed by absence of protesters
and how moderate, orderly & calm things are..
Saudi Arabia..

The Saudi jails.. and beheading are wondrous deterrents..
and they do have those Made in Canada war wagons
if ever a few dissidents dare to complain in public
Nothing like the threat of anti-personnel rockets in the face
or belts of 50 mm calibre pursuasion raking the protest
to reshape your perspectives on being ruled like a peon

I'm perplexed by the Wilbur Ross pick. The guy was the co-chair of the Bank of Cyprus, the largest bank in a country playground for Russian oligarchs where they begin the process of laundering their pillaged rubles. As I understand it there's an underground railroad for filched Russian riches that often begins in Cyprus before the monies are forwarded on to Germany (Deutsche Bank) or other European banks before being wired to the U.S. The rumour is that Trump was one of the beneficiaries who laundered that money through real estate deals.

My guess is that it's the money laundering that made Trump and his kids vulnerable which may have some bearing on his campaign associations with Manafort, Flynn and possibly even Wilbur Ross.

Mound
My understanding of Deep State is not the same as Martin's...if you read Chris Hedges and Lofgren et al...it all comes down to big Oil and other forces, NOT the competent and progressive civil services of the past.
JL

It's vexing,JL, that there is no settled definition of Deep State. The "drain the swamp" crowd and others, including some like Glenn Greenwald, seem to consider it the bureaucracy. They seem to reject their influence because they are unelected.

The corporate forces, Big Oil and Big Money, don't direct the government, they own it. That was effected shortly after the introduction of neoliberalism and free market fundamentalism. Through globalization these forces were able to effect, first, political capture (think America's "bought and paid for" Congress), moving on during Bush/Cheney to effect regulatory capture (stacking government regulatory boards and tribunals with industry appointees) before Trump's executive capture where the Goldman Sachs brigade and the billionaire boys club take over key government ministries.

If you haven't read it, check out the 2014 Princeton study by Gilens and Page that documents how America's government was transformed from a liberal democracy into today's oligarchy through political and regulatory capture. The funny thing is they're not able to conceal it. Many governments now serve elites and special interests at the direct cost to the electorate.

This is the real "swamp" and Trump has no intention of draining it. He and his feed from it.

The thing about "Deep State" as a term is that nobody really owns it, so anyone can Humpty-Dumpty it into anything they want. There certainly are interlocking, tentacular elite groups with influence over the state amounting to near control. One can consider, what did Obama's cabinet have in common with Trump's? Well, two words starting in "Gold" and ending in "achs", for one thing. If that's what you mean by "deep state" then there is one and it is bad.

There is also a professional civil service bureaucracy which certainly constitutes part of the "state" and which continues as politicians come and go. This overlaps some but only moderately with the "deep state" mentioned above. If this is what you define as the "deep state" then it exists and is ambiguous. Also not politically unified, as different agencies can have very different and even opposing policy slants.

On the third hand, if you define the "deep state" as constituted by the Rothschilds, Freemasons, modern incarnations of the Knights Templar and the creators of chemtrails then I would say you are wrong, there is no "deep state" by such a definition. Similarly, if one wanted to claim that the "deep state" was made up of proselytizers of the Gay and Feminist and other Liberal-identityist Agendas, I would say that's just a category error and there is no such thing as a "deep state" with that sort of politics.

OK, so if you want to say the "deep state" is that second thing then sure, we can discuss that "deep state". And if that's what's under discussion, then it is a thing distinct from the first "deep state" thing. But that does not somehow mean that finance, oil, military-industrial and security establishments do not have huge power, do not conspire together, and so on. They do, and there's nothing particularly foolish about referring to them as a "deep state". And the fact that they are part of the civil service and are playing hardball with Trump does not mean that the CIA, NSA or FBI suddenly are somehow on the side of the people; they are not, never have been, and show no signs of starting. That a vicious elite group is having a squabble with a vicious elite individual that we dislike personally, does not make the group non-vicious. Popcorn may be in order; saying the CIA/FBI overthrowing the elected president is some sort of victory for democracy most certainly is not.

Last paragraph of PLG says it nearly all.
The deep state is essentially financial-military-industrial complex with neocons (like those infamous architects of regimes change in Middle East and Libya) at the steering wheel.
Small parts of the bureaucracy with its lethargic self-serving subservience have been hijacked by the "deep state" due to the hierarchical system of command. PLG is also right on money here.

What you Mound have missed is the new offensive by the "deep state" to muddy the water and... the minds too. In the last decade or so the evidence of the presence of this "deep state" cabal/mafia became non-disputable (think www). Mafia like tactics including covert actions a.k.a. conspiracy to affect desirable outcomes are also evident.
So what this cabal does? Call themselves guardians of democracy and ridicule anyone who call a spade a spade. Believe in deep state or conspiracy? YOU are wearing a tin foil hat. The other tactics is to label somebody else with the term, such as the bureaucracy and get out the limelight...
A..non

From a specifically environmental point of view, it is worth remembering that the FBI in specific has made concerted efforts to spy on, harass, demonize, and criminalize environmental groups (much like our own CSIS and the RCMP). They call people in the Green movement terrorists, they feed information to big oil, coal, and whatever other polluters are finding environmental opposition annoying. They are far from a neutral party; they are just as anti-Green as Trump.