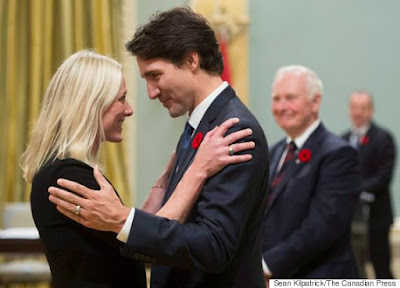 It's only taken a year and a half but, finally, Justin's EnviroMin, Cathy McKenna, has declared that "pollution isn't free" - only she really doesn't mean it. She's just bullshitting.

Dame Cathy veered clear of the "C" word, choosing "pollution" instead of "carbon."

It's hard to be mad at carbon. Pollution, on the other hand, has a bad name. So, in the course of her short meeting with reporters, McKenna made two dozen references to a price on pollution.

But an awful lot of pollution in Canada is free. One glaring example is the runoff of agricultural chemicals, primarily fertilizers, that contaminates our surface water generating toxic algae blooms that choke our rivers and lakes. Her ladyship doesn't seem to have any interest in pricing that. No, she's talking about carbon pricing on fossil fuels.

Too bad she couldn't be honest about it. However that might lead her into a trap. If we're to tax carbon at the pump we might just as well slap the same tax at the dock where we plan to load foreign supertankers with the highest-carbon ersatz oil on the planet.  Why shouldn't we tax it here? It won't be taxed in Asia where we intend to see it burned. But that's why she's a bullshitter.

The latest Maclean's (print edition) has an article on the Liberal Cabinet called Tru Duds. The only Minister they give full marks for competency is Goodale.

Personally, I find McKenna to be one of the worst ever. She has what is probably the most important mandates of our time and she is squandering it for the sake of the oil industry.