Welcome to WaterWorld. No, Not the One With Costner. 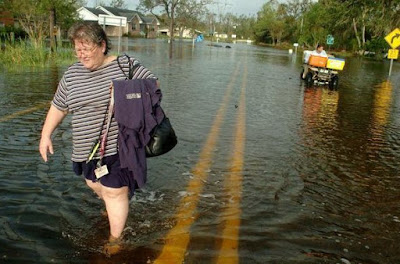 Even Americans pay attention to this facet of climate change - sea level rise. And the news is bad and getting worse.

You probably remember the early 1990s well enough. Not that long ago really. Well, over the past 25 years, the rate of sea level rise has increased threefold. And it's still speeding up.

A study published in scientific journal Proceedings of the National Academy of Sciences (PNAS) suggests the threat of rising sea levels has been drastically underestimated.

"It underlines that sea-level rise is a serious threat," he added.

Dangendorf, from the University of Siegen in Germany, worked with an international team of scientists from Spain, France, Norway and the Netherlands. They discovered that sea levels had risen relatively slowly - by about 1.1 millimeters, or 0.04 inches, annually - for much of the 20th century. But that changed in the early 1990s

This study isn't the first to highlight that the rate of sea-level rise is speeding up. But its findings suggest a significantly faster rate of increase than past research. One of the reasons for the recent acceleration, Dangendorf told DW, is the melting of ice sheets over recent decades.

"We have always had a great uncertainty over the contribution of the large ice sheets, which store 100 times more sea-level equivalents than glaciers," Dangendorf said.

The new research shows the impact of Greenland and Antarctica's ice sheets melting rapidly over the last 20 or 30 years has been greater than expected, and is likely to result in a larger future sea-level rise than previously predicted.

That spells trouble for coastal areas.

Over to you, America. Yes, we mean you, Louisiana. Brace yourselves.

The small floods that submerge roads and sometimes enter homes along Louisiana's coast could become more than an occasional headache. A new study suggests that the frequency of "nuisance flooding" around the Gulf of Mexico will double every decade thanks to small rises in sea level.

In lower latitudes, the flooding will be worse. The tropics, including South America and Africa, will experience a doubling of extreme flooding due to sea level rise, said Sean Vitousek, lead author of the study published in the Scientific Reports journal this week.

On the Louisiana coast, hurricanes, rather than sea level rise, will continue to pose the biggest flood danger. The same is true for the Caribbean Sea and the East Coast. "But the smaller floods are something to worry about, especially as they happen with more frequency," said Vitousek, a coastal hazards researcher at the University of Illinois at Chicago.

Nuisance flooding can degrade drainage and sewer systems, contaminate drinking water supplies, damage buildings and disrupt transportation and commerce. Decades ago, it was powerful storms that caused such problems.

"But due to sea level rise, more common (storm) events are now more impactful," wrote National Oceanic and Atmospheric Administration scientists in a 2015 report on nuisance flooding. The agency said small coastal floods have been happening two or three times more frequently than just 20 years ago.

"The takeaway is that it doesn't take much sea level rise - just 5 to 10 centimeters - to double the frequency of floods," Vitousek said.

The latest reports indicate sea level rise is about 4 mm. per year, nearly 1.6 inches per decade.  To add a little perspective here's a handy chart showing sea level rise back to the start of the Christian era. 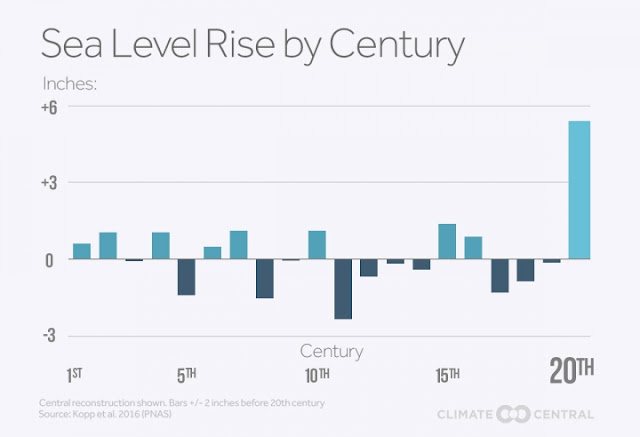 Ah, Mound. Even though I know that the story of Noah's ark and the great flood are lore, one can't help but think of the motive ascribed to the deity over that one which, if I recall correctly, was to wipe the earth of the scourge of humanity. Is this the Second Culling, perhaps?

Hi, Lorne. James Lovelock opined that, by the end of this century, mankind's numbers would be down to a few hundred millions. If that was right it would mean more than a cull but virtual extinction, the die off due to the range of climate change impacts and major war of many billions of humans. It's a huge number that truly defies imagining.The Earth, however, given a few hundred thousands of years, would bounce right back. Maybe that next evolutionary chain won't be as arrogant and selfish as we've been.

We better get a crash program to carefully study geoengineering. Because we are heading on a course that will require its use, and we do not want to use those tools completely blind.

Hi, Chris. One criticism of geoengineering is that most of the major options have effects that vary region by region. What might suit one region may cause devastating side effects elsewhere. It's even thought one nation's decision could spark conflicts by others who deem it an act of war.

As I've pointed out elsewhere, climate change is but one of three existential threats that threaten us and we either sort them all or we'll fail to resolve any of them. Climate change approaches - adaptation, mitigation and, yes, geoengineering - must be part of an effort that also addresses overpopulation and our gross over-consumption of Earth's finite resources. Tackling climate change in isolation is like putting out the fire in the livingroom while the flames consume the rest of the house. There are no cheap and dirty answers.