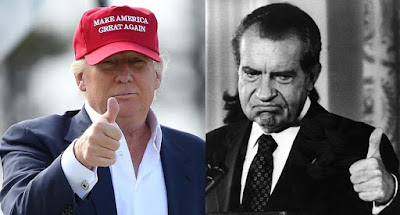 Richard Nixon famously said, "when the president does it, that means it's not illegal." Of course Milhous was saying that to David Frost, long after he had resigned the presidency to dodge certain impeachment.

It seems Donald Trump is of a like mind. If the Orange Bloat does it, it's not illegal. Two examples from this week. Before former acting attorney-general Sally Yates appeared before the Senate panel investigating Team Trump's ties to the Russians and Moscow's meddling in the election, Trump blasted a barrage of four tweets that were not only false but, in some minds, a thinly veiled attempt to intimidate the witness.

Witness tampering? It sure has that feel. That's a bigly felony.

And then there was the bizarre firing of FBI director, James Comey, just days after Comey had requested more resources from the Department of Justice to pursue the Russia investigations. Trump said it was over Comey's bungling of the investigation into Clinton's emails but nobody is buying that. Trump even tried to pin the decision on a newly minted Assistant Attorney-General's recommendation but that, too, has been proven a lie. So what does that leave but obstruction of justice? Get rid of Comey. Get a sycophant in the director's job. Kill the investigation. That sounds like obstruction, another bigly felony.

I'm pretty sure that somewhere on Capitol Hill, people are busy drafting Articles of Impeachment and that witness tampering and obstruction of justice have been added to the bill.

Former Wisconsin senator, Russ Feingold, has an interesting op-ed in The Guardian, "Donald Trump acts like an illegitimate president for a reason."


The American people did not really choose Donald Trump. His presidency exists without the support of the majority of voters and, in turn, without a true mandate from the American people. Trump walks and talks instead like an authoritarian, and seems to believe he is above the people and the law, and need not answer to either. He wants to be untouchable. He behaves with impunity and acts as if legal standards like obstruction of justice don’t apply to him.

Firing the director of the Federal Bureau of Investigation, James Comey, demonstrates a whole new level of defiance of the rule of law and our foundational system of checks and balances. More bluntly, it proves just how dangerous an illegitimate president is to our democracy. His actions do not only undermine the legitimacy and credibility of his presidency; they are a direct threat to our constitutionalism and our democratic legitimacy.

...The president took power in defiance of the people, and expects to be able to do so again. So the will of the people becomes irrelevant in the mind – and decision making – of an illegitimate president. An illegitimate president can fire the FBI director in order to impede an investigation into his own campaign, and believe there will be no consequences. If he can fire the head of the FBI, what else can he do?

What else can he do? We'll probably find that out soon enough.

Andrew Coyne, meanwhile, looks into the darkness ahead for the United States of America.


The comforting supposition that Trump, whatever danger his presidency might present, could be contained by the checks and balances built into the U.S. system, is now very much in doubt. For ultimately checks and balances depend upon a willingness of the president to be so checked and balanced — the very kind of norm that Trump has shown at every turn he is unwilling to observe.

We have been given a picture of the next four years, in which the best-case scenario is that the U.S. continues to drift — distracted, paralyzed, consumed by scandals, with no policy direction but the whims of an increasingly paranoid president and whichever side is ascendant in the constant civil wars within his administration. And the worst case? Oh, how about nuclear war in Korea?

The question is whether this prospect can safely be endured. And the answer, it is now clear, is no. If sense prevailed, the wheels would already be in motion to remove him from office. Alas, political calculations on both sides of the aisle may conspire to leave him there: the Republicans, in dread of the turmoil his removal would unleash among their base; the Democrats, because he may help deliver them the Congress, as early as 2018.

Trump knows he illegitimate, Mound. And that knowledge is behind everything he says and does.