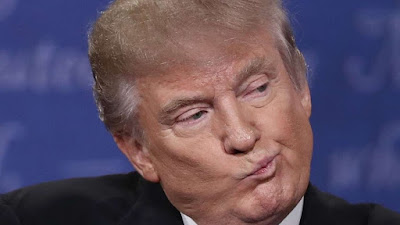 What do you do when the self-styled leader of the free world has the attention span of a fruit fly?

According to The Independent, Nato officials have instituted a new rule for their upcoming summit.

Nato will reportedly put a time limit on speeches at an upcoming summit with Donald Trump, in an attempt to maintain the US President’s attention span.

Speakers will be limited to between two and four minutes, sources within the organisation told Foreign Policy magazine. The summit of Nato’s 28 member countries will be held at the end of the month and the Belgian capital, Brussels.

And there's another thing:

NATO traditionally publishes a formal readout, known as a declaration, after each major meeting or summit. While they’re often lathered in diplomatic drivel, declarations signal new strategies and key policy shifts that come out of closed-door meetings, giving direction to allies and the NATO bureaucracy — and showcasing alliance unity toward rivals like Russia, a former senior NATO official told FP.

This year, NATO has scrapped plans to publish a full formal meeting declaration. One NATO official said that’s because it’s not a full summit, like past major NATO gatherings in Warsaw in 2016 or Wales in 2014. “It’s not necessary to have another full declaration, as it’s not a full summit,” the official said. “This meeting is just much more focused.”

But behind closed doors, other officials are giving a different reason. NATO isn’t publishing a full declaration “because they’re worried Trump won’t like it,” another source said.

Although its obviously a good idea to tell the loudmouth schnook nothing important there's no way of really knowing which of his stooges - oops, aides - are going to tell him everything anyway.

So silence whenever a US rep is in the room would seem to be the best strategy.

If the other members just stay silent Trump will not be able to deal with it and will go completely bananas. It would be best if news cameras were present.

It's time for the rest of the world to begin making their positions known and NATO seems a good place for that to begin.

I thought NATO was a military alliance. We count on generals assigned to NATO to lead our soldiers in battle. So why are these clowns collapsing faster than the Italian army at Caporetto when faced with a childish businessman?

I suspect, CAP, it's because he is the US forces Commander-in-Chief ... unfortunately.

I hear you UU4077. Still, if they look around NATO HQ someone might find a spine somewhere.

Meh, for most of those stuffed shirts it just means they'll take 4 minutes to say nothing whatsoever instead of 15 minutes or half an hour to say the same nothing.
The few at NATO who do actually say something, probably better if they hadn't anyway.