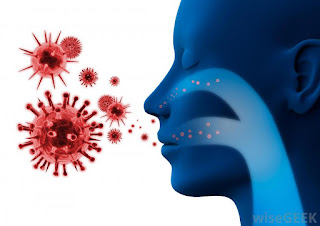 Let's be fair. Climate change isn't all bad. Then again, it's a safe bet that Abraham Lincoln's last visit to the Ford Theatre was pretty decent right up to the point of that gunshot.

One of the good things about global warming, we're told, is that it will make cold places a bit more liveable. In some zones growing seasons will be a bit longer which might open them up for agriculture and other development.

But that warming will probably be a double-edged sword. The BBC reports that the melting of the permafrost could bring some nasty surprises from the distant past. There are diseases hidden in the ice, and they are waking up.


Throughout history, humans have existed side-by-side with bacteria and viruses. From the bubonic plague to smallpox, we have evolved to resist them, and in response they have developed new ways of infecting us.

We have had antibiotics for over a century, ever since Alexander Fleming discovered penicillin. In response, bacteria have responded by evolving antibiotic resistance. The battle is endless: because we spend so much time with pathogens, we sometimes develop a kind of natural stalemate.

However, what would happen if we were suddenly exposed to deadly bacteria and viruses that have been absent for thousands of years, or that we have never met before?

We may be about to find out. Climate change is melting permafrost soils that have been frozen for thousands of years, and as the soils melt they are releasing ancient viruses and bacteria that, having lain dormant, are springing back to life.
...

"Permafrost is a very good preserver of microbes and viruses, because it is cold, there is no oxygen, and it is dark," says evolutionary biologist Jean-Michel Claverie at Aix-Marseille University in France. "Pathogenic viruses that can infect humans or animals might be preserved in old permafrost layers, including some that have caused global epidemics in the past."

In a 2005 study, NASA scientists successfully revived bacteria that had been encased in a frozen pond in Alaska for 32,000 years. The microbes, called Carnobacterium pleistocenium, had been frozen since the Pleistocene period, when woolly mammoths still roamed the Earth. Once the ice melted, they began swimming around, seemingly unaffected.

Two years later, scientists managed to revive an 8-million-year-old bacterium that had been lying dormant in ice, beneath the surface of a glacier in the Beacon and Mullins valleys of Antarctica. In the same study, bacteria were also revived from ice that was over 100,000 years old.
...

Some of the long-sequestered bacteria have been found to have an astonishing resistance even to most of the latest, "thermonuclear" antibiotics. So, should we add this as another existential threat to humanity?

One argument is that the risk from permafrost pathogens is inherently unknowable, so they should not overtly concern us. Instead, we should focus on more established threats from climate change. For instance, as Earth warms northern countries will become more susceptible to outbreaks of "southern" diseases like malaria, cholera and dengue fever, as these pathogens thrive at warmer temperatures.

The alternative perspective is that we should not ignore risks just because we cannot quantify them.

We just don't know which reduces the exercise to a civilizational-scale game of Russian Roulette. What should cause us to err on the side of caution is one thing we do know - modern humans probably have little to no natural immunity to many of these lurking pathogens.

This is a frightening scenario, Mound, that makes perfect sense. But as in most human endeavours of late, we will probably be desperate to treat the symptoms, while leaving the underlying cause largely ignored.


Ain't life grand, Lorne? As I read this I realized that, no matter the risks, the processes that will release them are now unstoppable. The economic activity, especially mining and drilling, can only increase the release of these pathogens, human exposure to them, and their transmission to more heavily populated regions to the south.