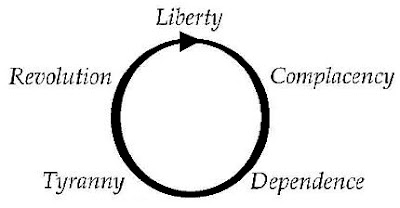 First the good news. Donald Trump increasingly seems to be psychologically incapable of pulling off some sort of fascist constitutional coup in the United States. He's no Joe Stalin and certainly no Hitler. He's not even in the same league with someone like Benito Mussolini. He's just a pretentious old slob with the sexual appetites of a goat and an insatiable need for adulation. Then again, he might just be waiting to catch his second breath.

The bad news is that you should never underestimate the damage a guy like Trump or those who pull his strings can inflict on the United States and, for that matter, many other countries whether friends, allies, rivals or even adversaries.

On Sunday, former Director of National Intelligence, James Clapper, warned that America's institutions are under assault - from the Russians and, on the inside, from the Trump administration. At the same time Fareed Zakaria lamented the betrayal of the Constitution by Congressional Republicans refusing to uphold America's system of checks and balances to restrain the excesses of the executive branch.

Which brings me to a couple of other insightful passages from Yale historian Timothy Snyder's book, "On Tyranny, Twenty Lessons From the Twentieth Century."

Sometimes We Have to Stand Up and Defend Our Institutions.

We have to assume that institutions will automatically maintain themselves against even the most direct attacks. This was the very mistake that some German Jews made about Hitler and the Nazis after they had formed a government. On February 2, 1933, for example, a leading newspaper for German Jews published an editorial expressing this mislaid trust:

'We do not subscribe to the view that Mr. Hitler and his friends, now finally in possession of the power they have so long desired, will implement the proposals circulating in [Nazi newspapers]; they will not suddenly deprive German Jews of their constitutional rights, nor enclose them in ghettos, nor subject them to the jealous and murderous impulses of the mob. They cannot do this because a number of crucial factors hold powers in check... and they clearly do not want to go down that road. When one acts as a European power, the whole atmosphere tends towards ethical reflection upon one's better self and away from one's earlier oppositional posture.'

Such was the view of many reasonable people in 1933, just as it is the view of many reasonable people now. The mistake is to assume that rulers who came to power through institutions cannot change or destroy those very institutions - even when that is exactly what they have announced that they will do. Revolutionaries sometimes do intend to destroy institutions all at once. This ws the approach of the Russian Bolsheviks. Sometimes institutions are deprived of vitality and function, turned into a simulacrum of what they once were, so that they gird the new order rather than resisting it. This is what the Nazis called Gleichschaltung.

Heed the Lessons Of the Last Century.

The American abolitionist Wendell Phillips [said] that "eternal vigilance is the price of liberty." He added that "the manna of popular liberty must be gathered each day or it is rotten."

The record of modern European democracy confirmed the wisdom of those words. The twentieth century saw earnest attempts to extend the franchise and establish durable democracies. Yet the democracies that arose after the First World War (and the Second) often collapsed when a single party seized power in some combination of an election and  a coup d'etat.
...

The hero of a David Lodge novel says that you don't know, when you make love for the last time, that you are making love for the last time. Voting is like that. Some of the Germans who voted for the Nazi party in 1932 no doubt understood that this might be the last meaningfully free election for some time, but most did not. Some of the Czechs and Slovaks who voted for the Czechoslovakian Communist Party in 1946 probably realized they were voting for the  end of democracy, but most assumed they would have another chance. No doubt the Russians who voted in 1990 did not think this would be the last free and fair election in their country's history, which (thus far) it has been. Any election can be the last, or at least the last in the lifetime of the person casting the vote. The Nazis remained in power until they lost a world war n 1945, the Czechoslovak communists until their system collapsed in 1989. The Russian oligarchy established after the 1990 elections continues to function, and promotes a foreign policy designed to destroy democracy elsewhere.

Does the history of tyranny apply to the United States? Certainly the early Americans who spoke of 'eternal vigilance' would have thought so. The logic of the system they devised was to mitigate the consequences of our real imperfections, not to celebrate our imaginary perfection.  We certainly face, as did the ancient Greeks, the problem of oligarchy - ever more threatening as globalization increases differences in wealth. The odd American idea that giving money to political campaigns is free speech means that the very rich have far more speech, and so in effect far more voting power, than other citizens.
...

Yes, Virginia, it can happen here.


Toby, as I've argued before, I think neoliberalism is akin to a malignancy that grows and spreads inside the body of democracy. The degree of sovereignty a neoliberal state yields freely and usually for marginal benefit to its populace develops into a power sharing regime with corporate interests. This is the very thing Teddy Roosevelt condemned in his Square Deal speech of 1910.

Once a corporatist state is in place a steadily illiberal democracy marked first by legislative capture, followed by regulatory capture, ensues. A wedge is driven between the electorate and those they put into office. The economic and political lines are redrawn. Inequality, which Stiglitz demonstrates in "The Price of Inequality" is largely a legislated result, spreads aided by a public rendered complacent by a host of forces including "creeping normalcy" and the dangled promise of great prosperity just ahead. Inequality proceeds to siphon wealth and, with that wealth, political power into the richest of the rich, as legislatures transform into this elite's handmaidens. The public, or a sizeable segment of it is reduced to become the "precariat" facing a life of what Morneau calls "job churn." Oligarchy is achieved (Gilens and Page, Princeton, 2014), much of it facilitated by generally well-intentioned officials who refuse to see it coming. The virus has consumed the host.