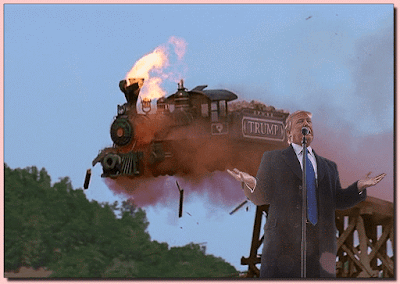 Donald Trump craves public adulation. That's probably one of the reasons he's still staging rallies. It's an opportunity to get a gaggle of feeble-minded Americans in a hanger to chant his praises.

But what do Americans really think of their new president. Quinnipiac pollsters asked Americans what word would they associate with Donald J. Trump.


A new Quinnipiac University survey of 1,078 voters across the nation has found that words like incompetent; liar; leader; unqualified; president; strong; businessman; ignorant; egotistical; and asshole are some of those most commonly associated with the president.

The top three words (idiot, incompetent, and liar) were given as response 39, 31, and 30 times, respectively. The least commonly used words included: Aggressive, decisive, embarrassment, evil, patriotism, and negotiator, to name a few.
Posted by The Mound of Sound at 4:29 PM

When I saw your headline, I thought you were posting about the appointment of Robert Mueller as special counsel with a broad mandate to investigate. That's going to burn a lot more than being called an asshole.


Overall I think that Mueller is a good choice for special counsel.

Agreed. I wasn't expecting the appointment of a special counsel, but if it did happen I thought it would go to some hack like Rudy Guliani or Trey Gowdy. Looks like Rod Rosenstein was trying to salvage what little credibility he has after penning that ludicrous made-to-order hatchet job on Comey.

The sheeple hate Trump because of corporate fake news. The people would hate Obomba and the Clintons if we had real news.

Anon 7:20, there's no such thing as balanced, objective, non-partisan news. Anyone who tells you otherwise is lying. Reporters and editors are people and as such bring politics to everything they observe and choose to report. The skilled news reader learns to seek out what is credible and backed by reliable evidence. The rubes get conned by assholes, like Trump, claiming that the first American black president is a Kenyan-born Muslim. You seem to fall into the latter category.

Journalists and editors don't bring fake news because of laziness and sloppiness. They weave establishment narratives into their coverage and op-eds because they are paid to.

Your idea a person is a racist if they don't believe in corporate fake news is no less absurd than your sorry excuse for sorry-excuse journalism.

Just curious: do you people think it's acceptable for judges to take bribes along with the politicians, journalists and economists, or do you place limits on your corruption?

Considering you are one of the little people who gets nothing out of all this corruption, but has to pay the price for it, I would say you are the rube.

Do we give Trump more credibility than he is worth?

I sometimes wonder if his end game is to avoid bankruptcy??

"When I saw your headline, I thought you were posting about the appointment of Robert Mueller as special counsel with a broad mandate to investigate. That's going to burn a lot more than being called an asshole."

Not going to happen this SC only has the power to charge for criminal offences and it will all be secret. Expect the fall guys to be at the bottom - Trump skates!

We will still be uninformed at the end of the enquiry, hint it will be released after the 2018 elections.

Yeah the special council is going to find out Russia hacked the election by not providing Wikileaks the fake news buried during the campaign.

Of course, the real reason these old Baby Boomers want Trump gone is they want the TPP back to boost their retirement savings. Just like they pumped up the mortgage market in Canada. They no longer work. So they feel like mini-plutocrats: entitled to everything without ever having to contribute anything.

Can Western civilization survive what these Baby Boomers have done to it? If the people stand up to them and change course. (I.e., real democracy: what the looters call "populism.") This 40-year neo-con neo-liberal downward spiral of theirs is going to bottom out some time. Could be tomorrow.

Unless this spoiled little bastard generation is pushed out of the way, there is no tomorrow. Just inevitable economic collapse, fascist revolutions in Europe (when people see capitalism and democracy as failed ideas) and WW3.


I figured the Facebook/Conspiracy loons would be drawn to this report just as moths to a candle. Oh yeah, this is all a plot by Baby Boomers. No it's not, morons, it is an account of a recent poll and Americans' word association with their president. Oh, look - chemtrail!

Anon 5:29. I read your screed and came up with two words - "hilarity ensued." I'm of that boomer generation you castigate. So are most of my friends. You're right, we're just a bunch of rich plutocrats out to take down Western civilization.

And, by the way, Mueller is "counsel." Council is where you go to whine about zoning laws.

Why do all the trolls have to be ignorant idiots like Trump? Why can't there be some bright, articulate, literate, knowledgeable trolls?