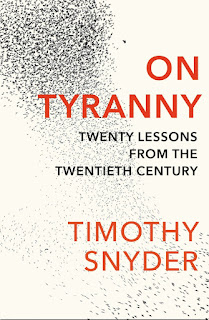 In Yale historian Timothy Snyder's new book, "On Tyranny, Twenty Lessons from the Twentieth Century," he recounts Victor Klemperer's observation that "truth dies in four modes, all of which we have just witnessed."

The first mode is the open hostility to verifiable reality, which takes the form of presenting inventions and lies as if they were facts.
...

The second mode is shamanistic incantation. As Klemperer noted, the fascist style depends upon "endless repetition," designed to make the fictional plausible and the criminal desirable.
...

The next mode is magical thinking, or the open embrace of contradiction. The president's campaign involved the promises of cutting taxes for everyone, eliminating the national debt, and increasing spending on both social policy and national defence.

...Accepting untruth of this radical kind requires a blatant abandonment of reason. Klemperer's descriptions of losing friends in Germany in 1933 over the issue of magical thinking ring eerily true today. One of his former students implored him to 'abandon yourself to your feelings, and you must always focus on the Fuhrer's greatness, rather than on the discomfort you are feeling at present.'
...

The final mode is misplaced faith. It involves the sort of self-deifying claims the president made when he said that 'I alone can solve it' or 'I am your voice.' When faith descends from heaven to earth this way, no room remains for the small truths of our individual discernment and experience. What terrified Klemperer was the way that this transition seemed permanent.  Once truth had become oracular rather than factual, evidence was irrelevant.

All four of Klemperer's modes have occurred and are in full force and effect today.  Trump has invoked the messaging of fascism and, for those who have succumbed, truth has died.

I am often reminded of Alan Bloom's theory of The Closing of the American Mind.

Regardless of what we think of him and his bigotries, Bloom was right on this point. If we teach mindless drivel we get people who can't think.


That's true enough, Toby, but today many people are being actively conditioned to accept half truths or outright lies through the undermining of critical thinking.