What's the Big Deal with Kushner? 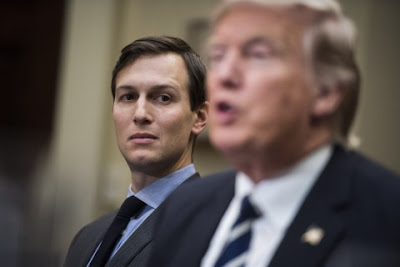 So Trump's son-in-law, Jared Kushner, sought to open a "back channel" line of communications with Russian officials. So, so what?

Trump's homeland security secretary, retired general John Kelly, dismissed the report as much ado about nothing. Kelly said these things happen all the time and even though they're "back channel" the information gathered is regularly circulated through the government. No harm, no foul.

Only that's not what Kushner was up to.  Former NSA and CIA director, Michael Hayden, says Kushner's channel was intended to conceal back channel communications from the United States government.

Kushner, President Donald Trump's son-in-law and a top White House adviser, floated the possibility of setting up a secure line of communication between the Trump transition team and Russia when he met with Russian ambassador Sergey Kislyak late last year, The Washington Post reported Friday.

Those talks would take place in Russian diplomatic facilities in the US, the Post said, creating a secure line that would essentially conceal the administration's interactions with Russian officials from US government scrutiny.

Kislyak reportedly passed along that request to Moscow, in a phone call that was promptly intercepted by US intelligence agencies during their routine eavesdropping of foreign agents on US soil.

It also would have raised a big red flag, Hayden said. He was unequivocal when asked if he would have sought to unmask the US person cited by Kislyak as having proposed a secret backchannel to Russia.

"Oh my, yes," Hayden told Business Insider on Saturday. "Anyone would have."

That intercepted communication could have led [former national security advisor Susan] Rice — who obtained reports containing summaries of monitored communications between foreign officials discussing the Trump transition, according to Bloomberg — to try to identify who on Trump's transition team was trying to set up this kind of backchannel.

The names of the US persons mentioned in the conversations would have been redacted in those reports. But high-level government officials like Rice can request from the appropriate agency — in this case, the National Security Agency — that the US person's identity be revealed.

Meanwhile, Foreign Policy's Emile Simpson, former British army officer and research fellow at the Harvard Society of Fellows has dropped the "T" word. Simpson argues that treason is more than a legal term.

At any time in the Cold War, what Kushner did would certainly have attracted the stigma of treachery. Should the same standard apply today?

Let’s consider Kushner’s best defense. Backchannels are an accepted part of diplomatic relations. A relationship may be too controversial for public consumption, and it is useful to have fora where diplomats and those entrusted with the leadership of states can speak frankly, without the glare of the media.

But this appears to have been no ordinary proposal for a backchannel. First and foremost, the intent was to avoid monitoring by the United States’ own intelligence agencies. And second, Trump’s team weren’t in government yet (unless the intent was for the backchannel to continue, or to start, after the inauguration, and thus provide a means to avoid U.S. intelligence monitoring while in office, which would be even more dubious).
...

Let’s be clear. There would be nothing inherently illegitimate with the Trump transition team pursuing better relations between the United States and Russia. Indeed, it was a major part of the campaign platform Trump used to win the election. Foreign policy debate between Russia doves and hawks has been going back and forth since the deterioration of post-Cold War relations following the West’s intervention in Kosovo 1999, and those who want the West to have warmer relations with Russia have many reasonable arguments.

But it’s the very legitimacy of wanting better relations with Russia, given Trump’s democratic mandate to pursue such a course, that makes Kushner’s desire to hide the Trump transition team’s connections with the Kremlin from U.S. intelligence so dubious, especially if he did intend for the backchannel to continue, or to start, after the inauguration. That is the kernel of the illegitimacy here: not the effort to improve relations through a backchannel, but the extraordinary measures to keep it secret from one’s own side.

In the Cold War, Kushner’s actions would have attracted the stigma of treachery because Russia was an enemy of the United States. But his actions would not have gotten him indicted because there was no ongoing open war in accordance with the legal definition of treason (18 U.S. code § 2381): “Whoever, owing allegiance to the United States, levies war against them or adheres to their enemies, giving them aid and comfort within the United States or elsewhere, is guilty of treason”.

Similarly today, what we are talking about is not the legal offense of treason but the stigma of treachery — the broader social meaning of treason.
...

If Kushner’s actions should come to attract the stigma of treachery, it would be in the old Roman Republican sense of maiestas, when public values and their expression in state institutions still meant something. Thus, in the Roman Republic, maiestas was about punishing individuals for hijacking their state positions for their personal gain. It could be used, for example, to prosecute official maladministration, like corruption by provincial officials or military officers. An apt modern equivalent would be soliciting personal investments by selling political access or expedited visas to rich Chinese people, which Kushner’s family business has already independently been accused of.

We’ll have to wait for the facts to see what Kushner may have been trying to hide from U.S. intelligence. But my hunch is that far from the “Manchurian Candidate” theories, this will turn out to be a sorry case of operating in the grey areas of the law to enrich oneself whilst in office. Not as bad as aiding the enemy, but still rancid. It is exactly what treachery as maiestas meant in Republican Rome: An offense against the dignity of the state understood as a community bound by its public values.

In Rome, the punishment for maiestas was normally exile. Kushner’s fate is still to be determined. But the public response to it will tell us much about whether the American people, under their new monarch, still have the dignity to protect their ancient majesty.

.. the Trumph family compact, enablers, GOP, and ignorant bizzaro base nave left no stone unturned in their scortched earth assault upon reason, morality, ethics, honesty or coherence in their 'Suck for Trump' labor of love & deceit. Trumph of course relies on Twitter to pimp his latest fears, lies & distortions.. Yes the witch hunt for Red Trumptober is in full cry.. though for very resl reasons. But in all reality, ridding America of such a rabid pestilance will take years. Like Stephen Harper, he has hordes of greedy taxpayer paid lawyers, plus his own highly experienced attorneys, well versed in defending such a crude deceitful cretin, wallowing in his new trough.

Kushner is much the same .. entitled, greedy, despicable but flying lower under the radar.. somewhat.. until now. He'll slither off long before Trumph must.. and the GOP will continue to bluster in concert, defending the undefendable.. selling out the citizenry .. Business as usual eh!

Turns out the NYT's Kushner/Nothing too see here story was fronted by 3 off the record Kushner supporters, who demanded to remain uncited and unmentioned.

They shopped the same story with the same conditions to the WaPo and WaPo told them to take a hike.

Bring on the prosecutions by all means. If we didn't break any laws, then we'll be - wait for it - exonerated. Nothing here folks; move along. What's taking you so long? Never mind any of that outdated distracting maiestas stuff. That doesn't amount to anything in this casino.

yeah but, Hilary's emails...sighhh
can you imagine if the republicans had found out someone in Hilary's camp was doing this. I mean they had that idiot Carlos Danger sharing a computer with his professional wife and they were screeching off with her head.
meanwhile Trump and all his entourage seem to be besties with their faux enemy, Putin.
I hope that the republican party goes down in flames, the only guy who seems to be outraged by this spiraling shit storm is John McCain/