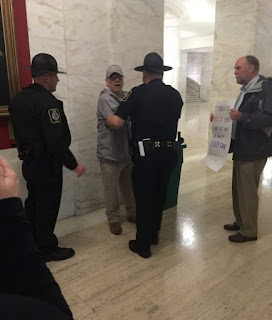 Politicians have always wrestled with annoying journalists and their annoying questions. Until now, that is.

Dan Heyman, a reporter for Public News Service, got the treatment.

Price was visiting West Virginia along with White House adviser Kellyanne Conway, to hear about the state's plans to deal with an opioid addiction crisis.

Heyman was following Price and Conway as they walked through the Capitol, trying to ask the official whether or not the Republican's new health care billwould allow domestic violence to be considered a pre-existing condition.

But, while Heyman was trying to get answers out of Price, a Capitol officer stopped him, handcuffed him and arrested him — later charging him with "willful disruption of state government processes," the Post reported. He was released on a $5,000 bail.

According to a criminal complaint, Heyman "was causing a disturbance by yelling questions at Ms. Conway and Secretary Price," and security agents were "forced to remove him a couple of times from the area."

Heyman, who has been covering health policy for years, says that before he was arrested no one asked him to leave the area, and that he was wearing a press pass that clearly identified him as a reporter. He also told police he was a journalist, he said, according to the Post.
Posted by The Mound of Sound at 1:11 PM

Steven Harper would have liked to do that.

Sadly, by being locked up Heyman will probably get more attention than by people reading his stuff. So will Conway and she might not like it.

.. so much of this kind of stuff slots perfectly with an article by Juan Cole ..
I sent a comment over to Northern Reflections this AM
and I'll cross post the link to him later
But to me its the conundrum presented by Trump supporters
and many officials & public servants are now feeling very comfortable
coming out of the closet with their prejudices or meanness
We see this connection via Trump and his so called 'rallys'
and he eggs this stuff on with essentially every tweet he spews
Certainly Kelly Anne Conroy & Sean Spicer are paid to shill for
how righteous disgraceful behavior is as long its by Donald Trump
or anyone acting as one of his surrogates

Seems like more and more if you get frustrated or defiant with some sort of bureaucracy, and you get riled and raise your voice, you get arrested for being a threat (to what, I don't know). Witness the recent airline arrests/beatings. Since when is being upset a crime?

Just be meek and mild and you'll be okay.