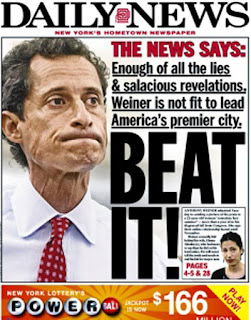 Registered sex offender. That should be the last nail in the coffin for the former Democratic congressman, Anthony Weiner.

Mr. Weiner will plead guilty to a single charge of transferring obscene material to a minor, pursuant to a plea agreement with the United States attorney’s office in Manhattan, one of the people said. Mr. Weiner surrendered to the F.B.I. early Friday morning.

The federal authorities have been investigating reports that, beginning in January 2016, Mr. Weiner, then 51, exchanged sexually explicit messages with a 15-year-old girl in North Carolina.

The plea covers conduct by Mr. Weiner from January through March of last year, the person said. A likely result of the plea is that Mr. Weiner would end up as a registered sex offender, although a final determination has yet to be made, the person added.

Weiner has had his day in court and he pleaded guilty.

The 52-year-old admitted to the federal court in New York that he had transferred obscene material to a 15-year-old girl. As part of a plea bargain arranged between the judge and his lawyer, Weiner will not be able to appeal any sentence of 27 months or less in prison.

"I have a sickness, but I do not have an excuse," the ex-lawmaker said.

Besides sending her inappropriate photos of himself, his victim said Weiner asked her to undress on camera. The allegations prompted then-FBI director James Comey to seize Weiner's laptop for evidence.

Comey then stunned the public in October by announcing that some material he had found on Weiner's laptop had given him reason to reopen the closed investigation in Hillary Clinton's handling of State Department business on a private e-mail server. Although Comey described himself as "mildly nauseous" at the idea, many have said his announcement was at least partially to blame for Clinton losing the presidency to Donald Trump.

He'll be OK. Trump has a cabinet post in mind for him. These types look out for one another.


Thanks for that cheerful observation, Dana.

Would I be shocked that someone within the FBI or a hacker followed Weiner’s accounts and leaked the DNC e-mails as opposed to the ‘Russians’ doing so?

No I would not be.