Ever Yearn For the MAD Old Days? 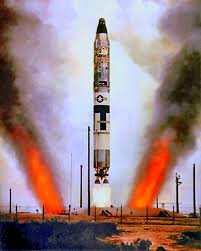 That's MAD as in "mutually assured destruction," the imaginary protocol that supposedly kept the Soviets and the Americans from plunging the world into nuclear winter during the Cold War.

The idea behind the MAD delusion was that each side would be deterred from launching a first strike by the knowledge that the other side would launch a massive retaliatory strike, each side wiping out the other.

Those of us from that time believed that MAD was, as the kids say, "a thing." I certainly believed it but apparently at no time did either side abandon the first strike option. I know, I know, that sounds crazy and it was but it wasn't MAD. MAD was just one of those things we told ourselves so that we could sleep a little better at night. We still hope it was our nuclear fairy godmother but well, your guess is as good as mine.

In case you haven't heard, nukes are back and in a big way. Russia still has more warheads than the U.S. and is developing new, more effective delivery systems in the form of new technology ICBMs (inter-continental ballistic missiles) and new, vastly extended range cruise missiles. The Russians have even boasted of having deployed seabed nuclear systems off the east coast of the United States as a counter to American anti-missile batteries in eastern Europe. Nobody knows if such seabed weapons exist but no one can say they don't either. Hmmm.

The U.S. is staying in the game too with a development said to restore America's first strike option, the Super-Fuze.  The basic idea of the super-fuze is that it so increases accuracy that American missiles, especially its submarine-launched missiles, can reliably take out Russian missile silos.  The Americans figure they can effectively cripple Russia's land-based missile batteries with a first strike and still have 80 per cent of their own missiles left for a follow-up attack. Here's where the thinking begins to get really dark.

The super-fuze first strike theory leads to a gamble. The Russians, with their land-based missile systems reduced to rubble, would have to think twice about launching a retaliatory attack knowing the Americans still have 80% of their missile force ready to launch against Russia's cities. Rather than ensure their own annihilation the Russians would sue for peace. That's the theory anyway.

At this point you have to factor in another variable, a genuine threat multiplier, the curious mind of Donald J. Trump. The idea of Trump with the nuclear codes has been troubling people since well before he defeated Hillary Clinton. The very thought wrings out a desperate "Noooooooo." While still a candidate, Trump was reported to have told a military affairs advisor, "what's the point of having nuclear weapons if we don't use them?"

So far half a million Americans have signed a petition to take away Trump's ability to launch nukes.  The initiative specifically addresses the first-strike problem. A bill, called the "Restricting First Use of Nuclear Weapons Act," would require the president to obtain Congressional approval to the offensive use of nuclear weapons. The petition supports that bill.

Politico reports today that a coalition of former military commanders and diplomats, calling themselves the Nuclear Crisis Group, has formed to educate Trump and other world leaders on the "growing danger of a nuclear conflict fueled by the rhetoric of President Donald Trump and destabilizing moves by Russian President Vladimir Putin."

The Nuclear Crisis Group, which will be announced in Vienna on Friday, boasts nearly two-dozen members of the nuclear priesthood of at least eight major nations — including a former commander of the U.S. atomic arsenal; the former chairman of the Joint Chiefs of Pakistan; a retired admiral who was in charge of India's nukes; the ex-heads of the Chinese military's strategic studies and science institutes; and Russia's former foreign minister and chief atomic weapons designer. Others joining the initiative include Thomas Pickering, the United Nations ambassador under George H.W. Bush who also served as ambassador to Russia, India and Israel.

"Not only is the U.S.-Russia relationship on much more shaky ground but the whole political environment has deteriorated," said Richard Burt, the chief negotiator for President George H.W. Bush in the 1991 Strategic Arms Reduction Treaty with Moscow and one of the leaders of the group.

He cited recent tensions with North Korea, an unchecked nuclear arms race between India and Pakistan, and China's steady nuclear buildup — all at a time when a vacuum of expertise and understanding on the nuclear threat exists, both within the U.S. and foreign governments and among the public.

"The issue of nuclear weapons has strangely kind of receded from people's consciousness," Burt said in an interview. "We must remind people in these different crisis situations that there is a nuclear danger and it needs to be addressed. We can play a useful role in reminding both governments and publics of the dangers as well as the possible solutions."

Let's hope - and pray - this doesn't turn into a footrace to the Oval Office between the U.S. military's pursuit of a new, first strike nuclear technology and the Cold War veterans trying to head them off at the pass.

Those looking for more information on efforts to corral the nuclear beast should
check out the Nuclear Threat Initiative, a non-partisan group of activists created by legendary senator Sam Nunn along with Ted Turner in 2001.

The insanity is everywhere.

Considering Mays terrible negotiation of Brexit the world should remember the old adage, Hell hath no fury like a woman scorned!!
And scorned she will be!

Missiles have been proven to be quite unreliable weapons.
A 100% success first strike is highly unlikely.
This is the danger of the penis wagging industrial military complex with it's outrageous claims to wonder weapons.
Add to that the head in the sand bravado of the Anglosphere.