And the Hits Just Keep on Coming - Papadopoulis Rolls Over 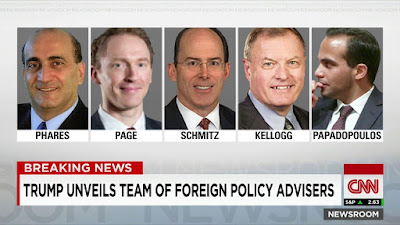 It's raining Trump conspirators. Just after word got out that Paul Manafort (plus one) has been indicted for tax evasion and money laundering, it's being reported that another Trump aide, George Papadopoulos, has pleaded guilty to lying to Mueller's investigators.  Papadopoulos was a senior foreign policy adviser to Trump during the campaign. It's a safe bet George has decided to play "Let's Make a Deal."

This could be juicy, the break that goes beyond tawdry money laundering.

Paul Manafort is reported to have turned himself in to the FBI. I wonder who'll be posting his bail.

The New Republic seems to agree that the Papadopoulos  plea is possibly a much bigger deal than the indictment of Paul Manafort (plus one) for money laundering and tax evasion.

Second, the Papadopoulos plea directly links a Trump campaign official with attempts to make a deal with the Russian government. Papadopoulos had emailed a high-ranking campaign official with a subject heading “New message from Russia.” In it, he proposed to make an “off the record” trip to Russia to meet with Russian foreign ministry officials “in the interest of Mr. Trump and the campaign.”

In sum, a member of Trump’s campaign has pled guilty and provided evidence that the campaign did collude or attempt to collude with Russia. That cuts to the heart of the Mueller investigation—and it means that the president should be in very deep trouble.

While the spotlight will remain on Paul Manafort, his indictment does not directly affect Trump - unless and until Manafort decides to cut his losses and roll over on the Mango Mussolini.  Papadopoulos, that's a different matter altogether.

Even most journalists have little grasp of how an investigation of this order works. Those who have been through this before can read a lot into developments, especially the announcement of Papadopoulos' guilty plea atop the Manafort (plus one) charges.  From The Atlantic.

The Papadopoulos revelations came as a complete surprise and undermined conservative talking points.

“Not only does this suggest that Mueller is taking into account the optics and the politics of the moment, but that he’s actually trying to take advantage of them to maximize the clout of the investigation and to control the narrative,” Vladeck said.

Other filings released Monday revealed Papadopoulos was actively cooperating with Mueller’s investigation as part of his plea deal. “One assumes that the plea deal was in exchange for something” on Papadopoulos’s part, Vladeck said. “And the ‘something’ is clearly not related to the Manafort indictment. So the real question is, what exactly did Papadopoulos give up?”

Papadopoulos’s plea agreement was initially sealed. According to a motion filed in July, were its particulars publicly known at the time, they would have hampered his ability to work on behalf of investigators as a “proactive cooperator.” According to Barrett, that phrase could refer to Papadopoulos “having law enforcement-monitored meetings,” including wearing a wire or arranging “calls or emails with other subjects of the investigation who are unaware that he is cooperating with the government.”

If the Papadopoulos plea was indeed a surprise, it will have Team Trump scrambling especially given that it seems the Trump adviser had been working for Team Mueller for nearly four months. He might have been wired in meetings or telephone calls with top Trump officials. Loose lips sink ships and people who have reason to fear that worry.

.. Its hard to figure the scale.. of the 'cone of silence' that may descend upon the Trump families, factions & enablers. Of course that sneering pustule Sarah Huckabee Sanders will be fed to the sharks.. and probably numerous others.. she's already started via Press Briefing #1.. seemingly on tax reform & a joke about lawyers in a bar and their tab.. But the quality of the overall silence may indicate how fearful any/or all of the TRUMP/GOP are of defensive, deflecting evasive answers. After all.. there's now blood in the water. Popodopoulos has already plead.. & Manafort/Gates are just money grubbing slime bags.. so far.

What will be interesting is how average Americans define or redefine their 'politics' ethics, beliefs etc. I speak mainly of the Trump base of course. Will they defend a President and his Administation revealed as just fine with Russian interference in elections? Accruing millions upon millions via access to a presidential campaign? Then hiding & laundering such monies? Oh they lived in Trump Tower? Really? Oh, social equals of the Trumps? Golfed with him perchance? His Country Club members? I'm not speaking of the dim conspiracy freaks.. No, just the average American, employed, & voted for Trump. You know.. coal miners, stevadores, teachers, nurses, fsrmers, firefighters etc.


At this point, Sal, Trump loses his advantage of shaping the narrative during Mueller's silence. He can try to disavow Manafort (plus one) but even that is going to become increasingly problematical if Mueller follows that into the Bank of Cyprus, Wilbur Ross, and Deutsche Bank. What'll have Trump baking ass bricks is Papadopoulos' guilty plea and the incredible emails. Trump can no longer claim there's no evidence of collusion and, best of all, Papadopoulos hasn't spoken on the public record - but he will. Papadopoulos has shown he won't be taking one for the team and what he knows he's already dished up to the investigators.

I still fail to see where there was overt Russian interference in the US elections. Nobody has proven a damn thing beyond a report citing "sources" for 25 pages, which I could have written in a lazy afternoon. I mean, are we talking about hacking the DNC? Or something actually more tangible? Oh yes, a few Facebook ads maybe. As if the US hasn't blatantly interfered in overseas elections for at least 70 years and is white as the driven snow itself. Or am I supposed to believe that it's quite all right for the US to be two-faced, but everyone else has to treat the US with impeccable decorum? It's the usual US "let's have us an enemy for getting more military funds" when so far as I know, Russia isn't an official enemy. In other words American bullsh!t as per usual because they're just so special and exceptional.

Now if Mueller, Comey's old pal in the bureaucracy 15 years ago, can get all these Trump thugs on various criminal charges and money laundering dealing with the Russian Mafia and criminal oligarchs (is there a lily-white one anywhere?), fine, have at it.

But I bet a year from now, there'll still be no proof of "Russian" hacking, while the criminals Trump consorted with will have a stretch in the Greybar Hotel for their misdeeds. Ane the PR machine will still be rattling on about Russian interference as if it were a truism. Propaganda in other words, fed to the most undereducated populace in the Western World, brainwashed to believe any damn thing.


You seem to come rather rapidly to pretty concrete conclusions, BM. I'm not sure on what basis you think you can prejudge/dismiss Mueller's investigations. Have you ever done one?


"I still fail to see where there was overt Russian interference in the US elections. Nobody has proven a damn thing beyond a report citing "sources" for 25 pages, which I could have written in a lazy afternoon. I mean, are we talking about hacking the DNC? Or something actually more tangible? Oh yes, a few Facebook ads maybe."

Now, BM, I don't want to rattle you with facts but consider this:

"At a Senate Judiciary subcommittee hearing Tuesday, [Facebook] General Counsel Colin Stretch will say that 29 million people were directly served content from accounts backed by the Internet Research Agency, a pro-Kremlin Russian group. Those posts, after they were liked, shared and commented on, travelled to the news feeds of approximately 126 million people at some point over a two-year period, his testimony states. That's equivalent to about 40 per cent of the US population."