Even Trump Can Do the Right Thing Occasionally 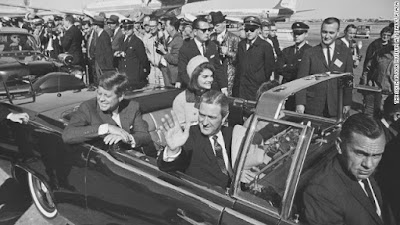 It's a small thing but it's still important to some Americans. Donald Trump says he won't block the release of the government's remaining tranche of documents about the Kennedy assassination when the embargo expires on October 26.

It's believed that about 3,000 documents remain under seal, embargoed by Congress 25 years ago.


The files are scheduled to be opened by the US National Archives on 26 October, but the president is entitled to extend their classified status.

Kennedy was shot dead by a sniper in November 1963 in Dallas, Texas.

The National Archives has already released most documents related to the assassination, but a final batch remains under lock and key.

"Subject to the receipt of further information, I will be allowing, as President, the long blocked and classified JFK FILES to be opened," Trump said in a tweet.

Congress ruled in 1992 that all JFK documents be released within 25 years, unless the president decides the release would harm national security.

The archive contains more than 3,000 previously unreleased documents, and more than 30,000 that have been released before but with redactions.
Posted by The Mound of Sound at 9:57 AM

Just how "intact" ARE these remaining documents?


I suppose we'll just have to wait until those who still have the requisite background knowledge get a chance to go over them.

BTW, as an American I would appreciate your thoughts on the essay I just wrote.