How the West is Getting Whipsawed by Climate Change. 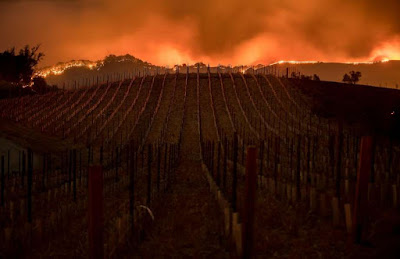 The current western phobia is wildfire. From Mexico to Alaska wildfires have swept the Pacific region this year.  Somehow this island was spared although the fires far inland were so intense and widespread that at times the smoke was sent out to sea and blanketed our communities.

The rain festival seems to have returned for its obligatory 8 month gig. Sure it's cold and wet but that's infinitely better than wildfires any day.

Unfortunately northern California has had no reprieve. The wine country of Napa and Sonoma counties is ablaze and firefighters can't keep up.

Trump and company can pretend that this conflagration is not the result of climate change but California governor, Jerry Brown, isn't having any of that. Neither is wine producer, Will Bucklin.

The impact of climate change was hard to ignore, said Will Bucklin, whose vineyard in Sonoma Valley was touched by the fire on Monday. Bucklin’s Old Hill Ranch lost several buildings and about a dozen vines, but he said he felt lucky that his home and most of the plants had survived.

It's the constant growth in these wildfires that erases any doubt whether Ottawa and Washington are asleep at the switch.  The sad fact is that we will continue to burn up until this finally becomes their priority - unless, by then, it's simply too late.

Demand for Canadian asbestos dropped off in the late 1970s when it became widely known that it was killing people. The last two Canadian asbestos mines closed in 2011, some 30 years later. In the meantime, the Canadian and Quebec governments supported the industry as it sold its deadly product to places with little or no health and safety regulations, where workers would be exposed and die horrible, lingering deaths. The industry was powerful, especially in Quebec, and towns depended on jobs in the mines. It was easy for politicians to look the other way, and for them to encourage regulators to do likewise. Canadian government officials know that mesothelioma's average 30-year latency period means they are unlikely to ever be held to account for their decisions.

The same dynamic applies in the oil industry, only more so. We know that burning oil is killing the planet. But the economies of whole provinces depend on oil extraction. Armies of oil industry lobbyists visit politicians daily to ensure that the industry's wants are front and centre on the agenda. Our regulators are entirely captured, especially in Alberta.


I wish I could muster some hopeful argument against your conclusion, Cap. I wish.

Alberta's former opposition leader, Kevin Taft, has a new book out on the political machinations of the oil industry - Oil’s Deep State: How the Petroleum Industry Undermines Democracy and Stops Action on Global Warming — in Alberta, and in Ottawa. There is an interesting interview with him here.