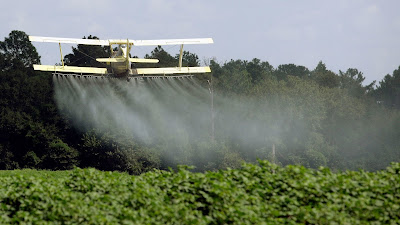 Now in a development similar to the discovery of decades old Exxon internal documents acknowledging man-made climate change, Monsanto is hoist on the petard of its own in house emails.  From Der Spiegel:

Some companies' reputations are so poor that the public already has low expectations when it comes to their ethics and business practices. That doesn't make it any less shocking when the accusations against them are confirmed in black and white.

Monsanto's strategies for whitewashing glyphosate have been revealed in internal e-mails, presentations and memos. Even worse, these "Monsanto Papers" suggest that the company doesn't even seem to know whether Roundup is harmless to people's health.

"You cannot say that Roundup is not a carcinogen," Monsanto toxicologist Donna Farmer wrote in one of the emails. "We have not done the necessary testing on the formulation to make that statement."

The email, sent on Nov. 22, 2003, is one of more than 100 documents that a court in the United States ordered Monsanto to provide as evidence after about 2,000 plaintiffs demanded compensation from Monsanto in class-action suits. They claim that Roundup has caused non-Hodgkin's lymphoma, a form of lymph node cancer, in them or members of their family.

The documents suggest the company concealed risks, making their publication a disaster for the company. The matter is also likely to be a topic of discussion at Bayer, the German chemical company in the process of acquiring Monsanto.

The popular agricultural chemical has been in use for more than 40 years and can now be found almost everywhere: in the urine of humans and animals, in milk, in beer, in ice cream, and above all in feed pellets from the United States and Brazil, which also end up being fed to German cattle and pigs.
Posted by The Mound of Sound at 11:42 AM

Odd this should come up recently.