British newspapers are reporting that Donald Trump's visit to the UK early next year has been downgraded from a state visit to a working visit. That means the Queen won't have to host the ogre. No grotesque images of the Queen trapped with the deviant in a majestic horse-drawn carriage either.

In an effort to avoid controversy, Mr Trump’s planned visit will be a more low-key event where he would be a guest of the US ambassador Woody Johnson rather than Buckingham Palace, according to the London Evening Standard.

British and American officials insisted the full visit would still go ahead but refused to comment on claims his first trip to the UK as President would be a more muted affair.

Canada has a landau used to transport royal visitors. Maybe Justin can borrow that from the Queen and give Trump a ceremonial spin around Ottawa. 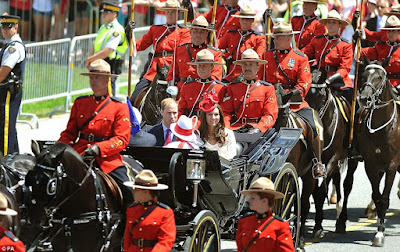 That doesn't sound like Trump at all. Eventually, I expect Trump will be hosting the royals at his Scottish golf resort. That way he can charge the US treasury bigly and ensure that he gets two scoops of ice cream while the royals get one.

No matter how a Trump visit is framed, Mound, I don't think it will sit well with the majority of Brits.

Not as a visiting Head of State.. of course & no Royals required..
Instead as one of the most despised persons on the planet
The potential protests & Trump's howls of outrage !
Mainstream Media will gorge on the downgraded pomp & whatever
and the wardrobe of Melania & stepdaughter Ivanka..
mebbe the Trump sons will lay off trophy head safari for the weekend

What tiresome posturing..
over such a worthless prick..

Why Sal, you spoilsport.

I was looking forward to a massive crowd of Londoners lining the pavements of St. James Park dropping trou on cue and mooning the Great Orange Bloat as the news cameras captured the glory for posterity.