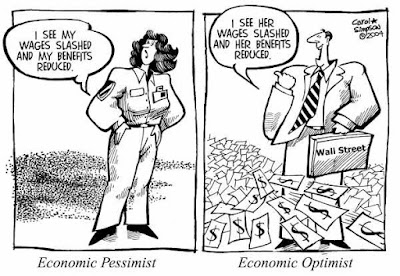 Neoliberal, free market capitalism, has had a good run since it was ushered in by Reagan, Thatcher and Mulroney. There's been plenty of time to watch it in action and, now, there's plenty of evidence to gauge just how well it has served us.

...some politicians are no longer defending free-market capitalism in terms of economic growth or the gains from globalization. Instead, they focus on individual opportunity. May, for example, has credited the system with reducing infant mortality, increasing life expectancy, driving down absolute poverty, boosting disposable incomes, expanding access to education, and slashing illiteracy rates.

But these claims aren’t in line with the facts. Start with maternal mortality. Much of the world has made great strides in making childbirth safer. From 1990 to 2015, Albania reduced its maternal deaths per 100,000 live births from 29.3 to 9.6. China, the poster child for state-led growth, reduced its rate from 114.2 to 17.7.

Meanwhile, the trend in the United States, the paragon of free-market democracy, has gone in the opposite direction, with maternal deaths per 100,000 live births actually rising, from 16.9 in 1990 to 26.4 in 2015. Equally shocking, the morbidity and mortality of white (non-Hispanic) middle-aged men and women in the US increased between 1999 and 2013.

The claim that free-market policies “slash illiteracy” is also misleading. In England, some 15% of adults (5.1 million people) are still “functionally illiterate,” meaning that they have literacy levels at or below those expected of an 11-year-old. Scotland’s most recent survey showed a decline in literacy, with less than half of the country’s 13- and 14-year-olds now performing well in writing. In fact, if you Google “successful literacy campaign,” the country with astonishing literacy gains that fills your screen is Cuba – hardly a free-market system.

The conservative case, eloquently articulated by May, is that a free-market economy, operating under the right rules and regulations, is the greatest agent of collective human progress ever created. If that claim is true, the only logical conclusion is that we are doing it wrong.

So what measures are needed to get it right? The practical solutions on offer seem to be fairly consistent across the political spectrum. Indeed, for all their furious positioning, the differences between left and right seem to have collapsed in this regard.

In the UK, the first suggestion is to ensure economy-wide investment and growth, which will require government intervention. Corbyn proposes a National Investment Bank and Transformation Fund to mobilize public investment and create wealth and good jobs. May, for her part, suggests an industrial strategy to promote “growth across the whole country,” helping to “turn local areas of excellence into national export champions.”

Second, private-sector leadership must change, in order to prevent short-term thinking, tax avoidance, and other forms of opportunism and personal enrichment. Here, Corbyn focuses on accountability in corporate boardrooms, while May calls for giving workers and shareholders a stronger voice in firms’ decision-making and ensuring that the largest companies have incentives to think long term.

A third corrective is to improve employees’ pay and working conditions. In Britain, even as the economy has grown, wages have been dropping – by 10% from 2007 to 2014. Corbyn promises to take action to stop employers from driving down pay and working conditions. For May, “all work should be fair and decent, with scope for development and fulfillment.” Both make the case for improving vocational training and technical education.

Fourth, in Britain, the government must address the public-housing crisis. In the 1950s and 1960s, an average of some 300,000 houses were being built every year; that figure has now dropped to less than half. Corbyn proposes a review of social housing, rent control, and regeneration for the people. May has announced the creation of a £2 billion ($2.62 billion) fund for building more council housing.

The orthodoxy established by Margaret Thatcher and Ronald Reagan in the 1980s – to roll back the state, after a decade of profligate and bloated government – is guilty as charged. A new consensus is emerging that more active and effective government is required to boost growth and expand opportunity. The jury is still out, however, on whether governments will be given the tools and support they need to rehabilitate the defendant.

The neoliberal era has been embraced by our political caste as an excuse to take them off the hook of governance. They freely offloaded much of their political responsibilities to the "markets" whatever that meant in any given situation. They chose to become petit fonctionnaires, technocrats, administrators, grey suits stuffed with wet cardboard. For them that meant all the trappings and privileges of power with only half of the responsibility, just not the half that mattered most to our nation and our people. That responsibility, the hard stuff, they shirked.

The statistics in your post are shocking, Mound, and clearly put to the lie the propaganda peddled by the neoliberals. However, as long as people seem content to let themselves be ruled by their 'betters' and refuse to educate themselves with the facts, little is likely to change. In Britain, however, one hopes that the beginnings of change can emerge from the widespread disdain May is held in, coupled with Corbyn's rising popularity.


This time last year everyone was dismissing Corbyn as a crank, especially Tony Blair.