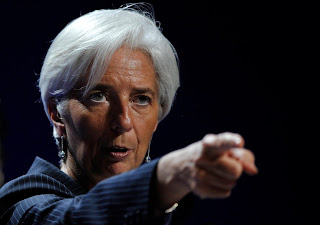 IMF chief Christine Legard has added her voice to the call for urgent action on climate change - and growing inequality.

"As I've said before, if we don't do anything about climate change now, in 50 years' time we will be toasted, roasted and grilled."

Both climate change and inequality were "two key issues" that would drive us to either utopia or dystopia, Lagarde stated. "If we don't address those two issues — of climate change and growing inequalities — we will be moving towards a dark 50 years from now," she said.

"Alternatives, electric cars and renewables, are definitely gaining market share, making a lot of progress and we are witnessing that," he said. "However, it will be decades before they take a major share of the global energy supply."
Posted by The Mound of Sound at 8:55 AM

She herself looks "toasted, roasted and grilled" by the sun.
Cannot be thaaat bad.
In any case, I would like to know details of Mrs. Legard environmental footprint leading to toasting, roasting and grilling.
But we, minions shall recycle everything, save for our breath, and travel only by foot from our villages.

Legarde has been warning for sometime now that our economic model is obsolete, Mound. But the forces of reaction are more influential than the IMF.

Toasted, roasted and grilled sums it all up, and is really all we need to know and remember, Mound.

I read a very sincere report today about research showing that, if we don't stop burning coal by 2050, the Antarctic will reach a tipping point and sea level rise by 2100 will increase by 4 feet and a bit.

After too many years of reading dire warnings of what may occur many decades into the future only to see them transpire in a fraction of the predicted time, I've given up on these studies. Even studies revealing current developments gain no traction and are flushed down the memory hole within a week or two.

We need to get control of our situation as it is now and not delude ourselves that we have plenty of time to mend our ways and yet I see very little interest in the idea.

Yesterday I compiled a list of major climate research from just the past two weeks. Two weeks. Arctic sea ice loss accelerating, ocean acidification speeding up, Britain losing much of its farmland within 30 to 40 years, Germany having lost two-thirds of its flying insects over the past 15 years and, now, Antarctic tipping points nearing. It's like yelling in space. Nothing is ever heard.