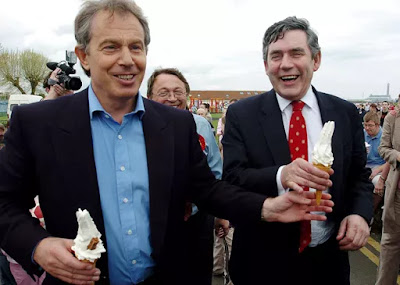 No, this isn't about taxing the rich to raise revenues to fight inequality. It's about locking the bastards up.

"Better Late Than Never" Gordon Brown, former British prime minister, argues that it was a huge blunder not to prosecute and jail the bankers behind the 2007/8 Great Recession, a "pour encourager les autres" sort of thing.

“If bankers who act fraudulently are not put in jail with their bonuses returned, assets confiscated and banned from future practice, we will only give a green light to similar risk-laden behaviour in new forms,” Brown says.

Brown had been prime minister for less than two months when the financial crisis began in the summer of 2007, but had been chancellor during the previous decade when the problems in the global banking system had gone unnoticed and unchecked.

Accusing the Conservatives of being too soft on bankers since taking office in 2010, Brown says: “Little has changed since the promise in 2009 that we bring finance to heel. The banks that were deemed ‘too big to fail’ are now even bigger than they were.

“Dividends and bankers’ pay today represent almost exactly the same share of banks’ revenues as before the crisis hit.”

Well, I guess it's a bit more humane than randomly hanging hedge fund managers from street lamps but still it's a bit rich coming from a former chancellor of the exchequer in the Blairified Labour era.
Posted by The Mound of Sound at 11:00 AM

Getting rather tired of retired/retiring politicians seeing the light.

The light comes on when the wallet is full.