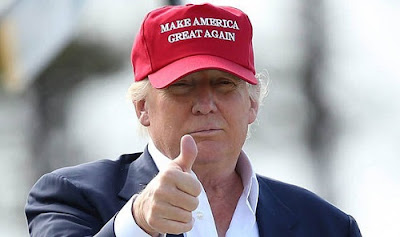 Donald Trump has boasted he's the man to Make America Great Again. Instead he may wind up presiding over America's decline.

Economist Carl Weinberg has told CNBC that China is about to topple the US dollar's reign as the world's reserve currency.

China will "compel" Saudi Arabia to trade oil in yuan and, when this happens, the rest of the oil market will follow suit and abandon the U.S. dollar as the world's reserve currency, a leading economist told CNBC on Monday.

Carl Weinberg, chief economist and managing director at High Frequency Economics, said Beijing stands to become the most dominant global player in oil demand since China usurped the U.S. as the "biggest oil importer on the planet."

Saudi Arabia has "to pay attention to this because even as much as one or two years from now, Chinese demand will dwarf U.S. demand," Weinberg said.

"I believe that yuan pricing of oil is coming and as soon as the Saudis move to accept it — as the Chinese will compel them to do — then the rest of the oil market will move along with them."
...

"Moving oil trade out of dollars into yuan will take right now between $600 billion and $800 billion worth of transactions out of the dollar… (That) means a stronger demand for things in China, whether it's securities or whether it's goods and services. It is a growth plus for China and that's why they want this to happen."
...

In recent years, several nations opposed to the dollar being the world's reserve currency have progressively sought to try and abandon it.

For instance, Russia and China have sought to operate in a non-dollar environment when trading oil. Both countries have also increased their efforts to mine and acquire physical gold if, or perhaps when, the dollar collapses.
Posted by The Mound of Sound at 2:28 PM

Well, no one in good faith can state, "No one could've seen this coming".

Honestly, I tend to feel every single military decision the USA has made in the past two decades has been in some way an effort to curb or even deny this eventuallity.

The closer this day happens when the dollar is abandoned, the more desperate and unpredictable the US will beome.


It will be a scary time, Troy. Transitions in dominant power are always difficult. More than half, perhaps 60 per cent or better, are said to have led to wars. Americans have already been groomed to see them as victims of other nations that have taken advantage of American generosity. They're also one if not the most materialistic of societies which leaves them disposed to those who might exploit their decline by scapegoating other nations. We've already seen that in Trump.

A small "professional" military allows the US to engage in 22 conflicts with minimal economic and political risk, as there is no economic dislocation, ( just a shift) from the wars and the few in "harms way" are deemed disposable volenteers,

I'm reminded of this sociopathic blog post by a still Brexiteer:

"Effectively we are looking at a ten year recession. Nothing ever experienced by those under 50. Admittedly this is not the Brexit I was gunning for. I wanted a negotiated settlement to maintain the single market so that we did not have to be substantially poorer, but, in a lot of ways I actually prefer this to the prospect of maintaining the 2015 status quo with ever degraded politics with increasingly less connection to each other.

I'm of the view that in recent years people have become increasingly spoiled and self-indulgent, inventing psychological problems for themselves in the absence of any real challenges or imperatives to grow as people. I have always primarily thought Brexit would be a reboot on British politics and culture. In a lot of ways it will bring back much of what is missing. A little austerity might very well make us less frivolous. "

This is not Libya or Iraq trying to sell oil in other than USD$$.
The kissing cousins ,USA an UK, are not going destabilise or bomb the shit out of China.

The Chinese own a lot of American bonds; how will a deflated USD$ affect them?

I too have wondered how the transition will impact the US bonds China holds. They might be more reticent to shift the reserve currency but for America's willingness to resort to 'qualitative easing', expanding the money supply, to discount their debt. My guess is that China realizes that it's a sooner or later situation.

I am not a financial wizard .
Quantitative easing will just put the USA into more debt?
As a (world) society just how long can we go expecting future generations to pick up the slack??

Future generations picking up the slack is no more than draining the world's resources until there is nothing left!!

.. d'ya think China will take advantage ? Of 4 and possibly 8 years
of an in over its head GOP with a hybrid Trump/Pence 'ascendancy'
in a US of A that's erupting internally over guns, violence ignorance
vote suppression, scandal, racism, nazis on the streets
poverry, hunger, massive pollution, climate (never happened) change ?

Re,
of an in over its head GOP with a hybrid Trump/Pence 'ascendancy'

Matters not; GOP or Democrat.
Both parties have been found lacking.
You cannot repair rotting wood you can only replace it.
The present USA and other nations attitude to winner take all is the downfall of , darn it,our winner take all attitude to politics.

Sal, I don't think many of us can predict what awaits. For example, Jared Diamond's research shows that where societies collapse the end comes on very suddenly and when that society is at its zenith.

TB, I wish a lot of Trump voters had asked that very question before they chose to throw their lot in with him.