Another FBI Investigation to Worry Trump. This Time It's Whitefish. 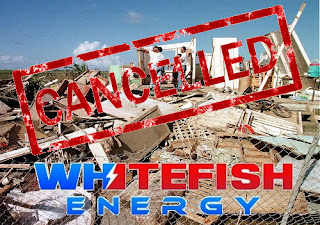 The Wall Street Journal reports that the FBI has launched an investigation into the incredibly smelly $300 million no-bid contract given to Montana company, Whitefish Energy, to rebuild Puerto Rico's shattered electricity grid.

Whitefish is basically a shell company incorporated just two years ago that had, prior to hurricane Maria's devastation of Puerto Rico just two full-time people on staff. It's also based in the small town of Whitefish, Montana, which just happens to be the home of Trump Interior Secretary, Ryan "Scorched Earth" Zinke.

Ricardo Ramos, CEO of the Puerto Rico Electric Power Authority (PREPA), announced Sunday the agency will cancel its contract with Whitefish Energy after the company “finish(es) what they started.” The announcement comes a day after the island’s governor, Ricardo Roselló requested that the deal be torn up. Whitefish Energy, a two-person outfit out of Whitefish, Mont., raised eyebrows when it landed the $300 million, no-bid contract in the weeks after Hurricane Maria hit Puerto Rico and left the U.S. territory largely without power.

At "Coincidence Central," a.k.a. the Trump White House, officials indignantly deny there could be any possible connection between Whitefish Energy, a Trump donor, and the favourite son of Whitefish, Interior Secretary Zinke, and the Trump administration. Who would even imagine such a thing?

Grifters, they're just a bunch of damn grifters.
Posted by The Mound of Sound at 4:12 PM