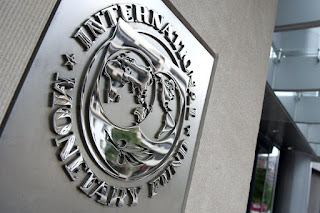 In another blazing flash of economic sanity, the IMF, which lately has denounced neoliberalism as the wrecker of national economies, has prescribed levying higher taxes on the rich as the means to redress inequality without hitting growth.

The Washington-based IMF used its influential half-yearly fiscal monitor to demolish the argument that economic growth would suffer if governments in advanced Western countries forced the top 1% of earners to pay more tax.

The IMF said tax theory suggested there should be “significantly higher” tax rates for those on higher incomes but the argument against doing so was that hitting the rich would be bad for growth.

But the influential global institution said: “Empirical results do not support this argument, at least for levels of progressivity that are not excessive.” The IMF added that different types of wealth taxes might also be considered.

In today's Guardian, the editorial board gives a big thumbs up to heavily taxing the super rich, the very thing we used to know to do back when we weren't driving the middle class into a state of precarity.

For almost 40 years, since the arrival of Margaret Thatcher in Downing Street and Ronald Reagan in the White House, the economic orthodoxy on taxation has been that higher taxes for the 1% are self-defeating. Soaking the rich, it was said, would punish initiative and lead to lower levels of innovation, less investment, weaker growth and, therefore, reduced revenue for the state.
...

First, it says that tax systems should have become more progressive in recent years in order to help offset growing inequality but rather have been becoming less progressive. Second, it finds no evidence for the argument that attempts to make the rich pay more tax would lead to lower growth. There is nothing especially surprising about either of the conclusions: in fact, the real surprise is that it has taken so long for the penny to drop. Growth rates have not picked up as taxes have been cut for the top 1%. On the contrary, they are much weaker than they were in the immediate postwar decades when the rich could expect to pay at least half their incomes – and often substantially more than half – to the taxman. If trickle-down theory worked, there would be a strong correlation between countries with low marginal tax rates for the rich and growth. There is no such correlation and, as the IMF rightly concludes, “there would appear to be scope for increasing the progressivity of income taxation without significantly hurting growth for countries wishing to enhance income redistribution”.

With a nod to the work of the French economist Thomas Piketty, the fiscal monitor also says countries should consider wealth taxes for the rich, to be levied on land and property. The IMF’s findings on tax provide ample and welcome political cover for Mr Corbyn and John McDonnell, the shadow chancellor, as they seek to convince voters that Labour’s tax plans are not just equitable but also economically workable. By contrast, the study challenges Donald Trump to rethink tax plans that would give an average tax cut of more than $200,000 a year for someone earning more than $900,000. The response from the US administration was predictable: mind your own business. The IMF is not naive. It knows it is one thing to make the case for higher taxes on the rich but another thing altogether to get governments to implement them, because better-off individuals have more political clout. The IMF has demolished the argument that what is good for the super-rich is good for the rest of us, but don’t expect the top 1% to give up without a fight.

Sadly our once moderately progressive Canada has seen the Liberals, even the New Democrats, drawn to the neoliberal right as Harper triumphed in his goal to shift Canada's political centre well to the right. We don't have a Jeremy Corbyn, or a Bernie Sanders much less an Elizabeth Warren on our political horizon. We're a dumbed down petro-state. Andrew Nikiforuk, whose latest book is "The Energy of Slaves: Oil and the New Servitude," explains what we've done - to ourselves.

We can't expect to free ourselves from the yoke of neoliberalism with its obsession for the everyday low taxes fetish until we get ourselves out from underneath Scheer's Tories, Trudeau's neo-Liberals, even Singh's New Dems as currently constituted. There'll be no Corbyns or Sanders or Warrens from their ranks. The wisdom of the World Bank, the International Monetary Fund, Thomas Picketty, Joseph Stiglitz, Nicholas Stern and so many others won't take hold in Ottawa and our provincial legislatures simply because it's vital to our societies and our people. That cuts little ice in our political circles.

I always struggle with the use of 'irony'.
Apparently the pop hit by Alanis Morissette is a mis-use.

So ... one of the few things I can applaud the vapid Trudeau gov't for: attempting tax reform .... is so badly botched that it has likely set back the cause for a generation. Is that ironic?

Perhaps the young lad was ready .... but most of his ministers were obviously not.

Yes, NPoV, that is indeed ironic. I wonder how he's doing with KPMG and their well-heeled tax cheats?

Trudeau and his friends needed to start his "tax reform" with the special tax treatment granted to stock options given key employees that Trudeau promised to clamp down on during his election campaign.

While I appreciate Trudeau's more "friendly" approach, I would appreciate some substance to what he proclaims. He is not Pierre in politics (while I did not like PET back in the day, I now appreciate some of his actions, through more "discerning" (older/wiser?) eyes. Not perfect, by any means. But, much better than JT.)

"For almost 40 years, since the arrival of Margaret Thatcher in Downing Street and Ronald Reagan in the White House, the economic orthodoxy on taxation has been that higher taxes for the 1% are self-defeating. Soaking the rich, it was said, would punish initiative and lead to lower levels of innovation, less investment, weaker growth and, therefore, reduced revenue for the state."

During the 1950's/60's the US had it's greatest GDP growth ever. It also had the highest tax rates on the "wealthy". Hmmm. Is there a lesson here? Apparently not according to the Austrian/Chicago schools of economics.

The premise appears to be that it's ok to tax the extra-rich because it won't slow economic growth. Arguments that assume that 'growth' is the solution to everything leave their conclusions less than satisfying to me.


Oh, Al, please don't get me started on the issue of growth. I think a quarter of the posts on this blog address our delusions about growth.