Scholars Gather to Lament the Decline of American Democracy. Relax Guys, That Horse Left the Barn Years Ago. 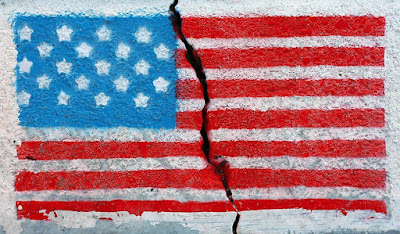 The scholars pointed to breakdowns in social cohesion (meaning citizens are more fragmented than ever), the rise of tribalism, the erosion of democratic norms such as a commitment to rule of law, and a loss of faith in the electoral and economic systems as clear signs of democratic erosion.

Then they began whistling past the graveyard, pretending that there's still time to pull out of the dive.

Yascha Mounk, a lecturer in government at Harvard University, summed it up well: “If current trends continue for another 20 or 30 years, democracy will be toast.”

Nancy Bermeo, a politics professor at Princeton and Harvard, began her talk with a jarring reminder: Democracies don’t merely collapse, as that “implies a process devoid of will.” Democracies die because of deliberate decisions made by human beings.
...

Adam Przeworski, a democratic theorist at New York University, suggested that democratic erosion in America begins with a breakdown in what he calls the “class compromise.” His point is that democracies thrive so long as people believe they can improve their lot in life. This basic belief has been “an essential ingredient of Western civilization during the past 200 years,” he said.

That pessimism is grounded in economic reality. In 1970, 90 percent of 30-year-olds in America were better off than their parents at the same age. In 2010, only 50 percent were. Numbers like this cause people to lose faith in the system. What you get is a spike in extremism and a retreat from the political center. That leads to declines in voter turnout and, consequently, more opportunities for fringe parties and candidates.

Political polarization is an obvious problem, but researchers like Przeworski suggest something more profound is going on. Political theorists like to talk about the “social compact,” which is basically an implicit agreement among members of society to participate in a system that benefits everyone.

Well, that only works if the system actually delivers on its promises. If it fails to do so, if it leads enough people to conclude that the alternative is less scary than the status quo, the system will implode from within.

Przeworski believes that American democracy isn’t collapsing so much as deteriorating. “Our divisions are not merely political but have deep roots in society,” he argues. The system has become too rigged and too unfair, and most people have no real faith in it.

Where does that leave us? Nowhere good, Przeworski says. The best he could say is that “our current crisis will continue for the foreseeable future.”

We’ve heard a lot of chatter recently about the importance of democratic norms. These are the unwritten rules and the conventions that undergird a democracy — things like commitment to rule of law, to a free press, to the separation of powers, to the basic liberties of speech, assembly, religion, and property.

Daniel Ziblatt, a politics professor at Harvard, called these norms “the soft guardrails of democracy.” Dying democracies, he argued, are always preceded by the breaking of these unwritten rules.

Another startling finding is that many Americans are open to “alternatives” to democracy. In 1995, for example, one in 16 Americans supported Army rule; in 2014, that number increased to one in six. According to another survey cited at the conference, 18 percent of Americans think a military-led government is a “fairly good” idea.

Ziblatt identified what he calls two “master norms.” The first is mutual toleration — whether we “accept the basic legitimacy of our opponents.” The second is institutional forbearance — whether politicians responsibly wield the power of the institutions they’re elected to control.

As for mutual toleration, America is failing abysmally. We’re hardly better on the institutional forbearance front.

Most obviously, there’s Donald Trump, who has dispensed with one democratic norm after another. He’s fired an FBI director in order to undercut an investigation into his campaign’s possible collusion with Moscow; staffed his White House with family members; regularly attacked the free press; and refused to divest himself of his business interests.

The Republican Party, with few exceptions, has tolerated these violations in the hope that they might advance their agenda. But it’s about a lot more than Republicans capitulating to Trump.

The Breakdown of Basic Trust

Kuran calls it the problem of “intolerant communities,” and he says there are two such communities in America today: “identitarian” activists concerned with issues like racial/gender equality, and the “nativist” coalition, people suspicious of immigration and cultural change.

Each of these communities defines itself in terms of its opposition to the other. They live in different worlds, desire different things, and share almost nothing in common. There is no real basis for agreement and thus no reason to communicate.

The practical consequence of this is a politics marred by tribalism. Worse, because the fault lines run so deep, every political contest becomes an intractable existential drama, with each side convinced the other is not just wrong but a mortal enemy.

Consider this stat: In 1960, 5 percent of Republicans and 4 percent of Democrats objected to the idea of their children marrying across political lines. In 2010, those numbers jumped to 46 percent and 33 percent respectively. Divides like this are eating away at the American social fabric.

Trump and the Cult of Failure

Timothy Snyder, a Yale historian and author of the book On Tyranny, gave one of the more fascinating talks of the conference.

...Take Trump’s “Make America Great Again” slogan. The slogan itself invokes a nostalgia for a bygone era that Trump voters believe was better than today and better than their imagined future. By speaking in this way, Snyder says, Trump is rejecting conventional politics in a subtle but significant way.

Why, after all, do we strive for better policies today? Presumably it’s so that our lives can be improved tomorrow. But Trump reverses this. He anchors his discourse to a mythological past, so that voters are thinking less about the future and more about what they think they lost.

“Trump isn’t after success — he’s after failure,” Snyder argued. By that, he means that Trump isn’t after what we’d typically consider success — passing good legislation that improves the lives of voters. Instead, Trump has defined the problems in such a way that they can’t be solved. We can’t be young again. We can’t go backward in time. We can’t relive some lost golden age. So these voters are condemned to perpetual disappointment.

Trump’s nostalgia is a tactic designed to distract voters from the absence of serious solutions. Trump may not be an authoritarian, Snyder warns, but this is something authoritarians typically do. They need the public to be angry, resentful, and focused on problems that can’t be remedied.

Snyder calls this approach “the politics of eternity,” and he believes it’s a common sign of democratic backsliding because it tends to work only after society has fallen into disorder.

...people have gradually disengaged from the status quo. Something has cracked. Citizens have lost faith in the system. The social compact is broken. So now we’re left to stew in our racial and cultural resentments, which paved the way for a demagogue like Trump.

Our problems are deep and broad and stretch back decades, and the people who study democracy closest can only tell us what’s wrong. They can’t tell us what ought to be done.
Posted by The Mound of Sound at 4:14 PM

Growing up in post war Britain ; I marveled at the portrayal of the, affluent, USA.
As time passed I started to wonder; is this real,can it go on forever?
One thing I did learn as a youth is that if it sounds too good to be true; it usually is!!


There was a period, TB, the pre-Reagan years where America had a solid and expansive middle class and progressive change still seemed viable but that was killed off.

Thanks for the link. To Kill a Mockingbird, indeed. It reminded me of the efforts to purge the N word from Mark Twain's Huck Finn.

Remember PNAC, the Project for the New American Century, that arrogantly imagined that the 21st century belonged to America. That was, of course, the home of the neocon movement who thought that America ought to use its economic and military power to enforce its dominance over everyone else, friend and foe alike. That's where I suspect American empire and American democracy commenced a terminal slide.

Nope, the adoption of Straussian Economic's by the Right, knowing full well it was utter bs and would "hollow out" the middle class, the poor and entrench a plutocracy,

All because it carried certain political "conveniences" for attacking those they hated, was the start,

When Media and Academic's also adopted the ludicrous theories of Leo Strauss, to embrace bothsiderism, was the middle,

and when the Center/ Left adopted the Straussian arguments, rather than calling utter bs, was the end.


You're certainly right, Jay. The centrists and the left have been co-opted into neoliberalism and they still embrace it. It's the legacy of Layton and Mulcair, the Blairification of the NDP. From what I've read I don't think Jagmeet is interested in straying too far from their path.

As for Trudeau, he's hopeless.

For 30 + years, almost nobody has taught, published, prolestized "real" economic's.

It's hard for "the Left", to discuss actual economics, when 99% of the population have been propagandized to believe "fake" economics.

In some regards, you have to have "lived through it". The Boomer's, most of them are happy at the result, Gen X how ever,

Sadly, for most of those born after 1960, "eat the rich" isn't going to be a taxation hyperbole, but a literal survival strategy.


Jay, radical as your conclusion sounds at first blush, with each passing year it seems increasingly valid.

https://www.truthdig.com/articles/gore-kerry-clinton-put-trump-white-house/
That is the reason to despise junior's decision to cancel electoral reforms.