Is Airbus Flying to Bombardier's Rescue? 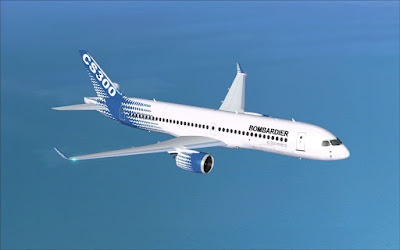 Boeing has tried to kill off the C-class aircraft using its clout to trigger punitive tariffs totalling nearly 300 per cent even though the Bombardier aircraft is of a different class to anything Boeing has on offer.

The deal may rescue the C-class - and Bombardier - but Airbus is exacting a stiff price.

The two aircraft manufacturers announced the partnership Monday evening, weeks after the United States announced 300 per cent preliminary duties on exports of the aircraft following a complaint from Airbus rival Boeing.

The partnership is expected to result in significant CSeries production cost savings by leveraging Airbus's supply chain expertise, but Airbus won't be paying any money for the acquired stake.

Airbus will acquire a 50.01 per cent interest in the CSeries Aircraft Limited Partnership, which manufactures and sells
the plane.

Bombardier will own 31 per cent and the Quebec government's investment agency will hold 19 per cent.

Still, 49.99 per cent of profits on a viable and perhaps expanded aircraft programme is a lot better than 100 per cent of nothing.

The possible snag in the deal, at least for Canadian aerospace, is a rumoured provision that Airbus gets the entire C-series project in five years. That would seem to leave Bombardier and the government of Quebec five years to recoup their investment before Airbus swallows the C-series jetliner.

As for Canadian manufacturing jobs there is also talk of building the C-series in Alabama for American customers. Because nothing says high skilled manufacturing like Alabama.

Was this a good strategic move for Bombardier or a capitulation in the face of possible ruin?
Posted by The Mound of Sound at 4:54 PM

The USA has never had free enterprise; well not in my lifetime.
Years ago when The French gave us the Caravelle and the UK the BAC111 the USA manufacturers freaked out and demanded trade barriers.
The Concorde had the USA in hysterics as their SST programme failed to produce.
So the USA air products companies amalgamated to become more productive ; spread out the manufacturing to most USA states and gained the support they needed to 'discourage' foreign aircraft products.
And so; Airbus was born to match the manufacturing power of the amalgamated US companies.
So now we have a situation where there is little room for the upstart aircraft producer to enter the market.
Bombardier ( don't forget their Avro, Short and Harland roots) not to mention Embraer are seen by the USA as potential competitors in the future.
Sam Slick, the American trader won't put up with competition!!
We are not well served by these monopolies.
Both Airbus and Boeing are pushing aircraft into production before all faults have been eradicated and it's a matter of time before one of their mega airliners goes down with many lives with it; such are the demand of shareholders.

You need to update your mind regarding Alabama manufacturing. Honda went there instead of increasing output in Canada quite a while ago and has since run out of space. Mercedes builds both SUVs and a goodly portion of global C-class cars there. Honda makes the Pilot, Ridgeline and MDX. Hyundai produces the Sonata, and Toyota has a major engine manufacturing facility there. Thishis has been ongoing for 20 years. And Airbus is there as well, plus goodness knows how many peripheral companies supplying the majors with components.

I'm an automotive enthusiast, so happen to know these things. This is one of the sides of NAFTA nobody in Canada ever thinks much about, preferring to think about Mexico getting all the investment in automotive plants. And they'd be underinformed.