A guy dressed in black with a black hat walks into the Asheville Regional Airport in North Carolina shortly after midnight last Friday. He's carrying a black bag. A short while later he walks out only without the bag. It's all captured on security cameras.

Alert airport security staff summoned the bomb dog. The dog found the bag and reacted as it was trained to respond to explosive.  Inside was an ammonium nitrate/fuel oil bomb (same stuff used by Timothy McVeigh in Oklahoma)  with plenty of nails and bits for shrapnel - and a timer set to detonate the bomb at 6 a.m.

The suspect was tracked down, arrested and promptly spilled his guts. He admitted he was "preparing to fight a war on U.S. soil" and that the bomb was intended to be his opening salvo.  Ordinarily this would be perfect fodder for Donald Trump to rage against Muslims and people of colour, any group he's already targeted. Only President Queeg hasn't said a word.

The would-be bomber wasn't Muslim. He wasn't a person of colour. He was just another damned rightwing nutjob, the sort that Trump cultivates as part of his base. The sort that Trump would say when he wasn't trying to blow up innocent civilians was a "fine person."

The story didn’t go viral and Trump didn’t tweet about it because the bomb was not placed by an immigrant, or a Muslim, or a Mexican. It was placed there by a good ol’ white man, Michael Christopher Estes. Unlike the Las Vegas shooter, Stephen Paddock, whose motive is still hard to discern, Estes wanted to be very clear that his ultimate goal was to accelerate a war on American soil.

Sorry if it sounds like you’ve heard this story before. I’m as tired of writing it as you are reading it, but you know good and well that if Estes was a young Muslim — hell, if he had ever even visited a mosque in the past 25 years — that Trump would be tweeting about him right this very moment to tout how essential a Muslim ban is for American safety.

A Muslim attacker’s mugshot would become a meme across the conservative media. Mainstream American outlets would be covering the heroic bravery of those who thwarted the terrorist plot. We’d all be seeing footage of the perpetrator being walked from the police car to the jail and from the jail to the court room. Out loud, people would talk and tweet about the man’s family and friends and networks — wondering where he was radicalized, and if anyone else feels the way he does. 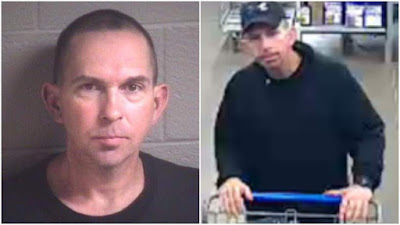 If this is ever properly investigated, I expect we'll hear that Mr. Estes was radicalized by a steady diet of Fox, hate radio and conspiracy websites. We'll find out that he learned bomb-making courtesy the US military or one of the US's many poorly regulated white-supremacist militias. And we'll be shocked to hear he has a history of spousal abuse. In short, just another white, male, right-wing nutjob who thinks Trump isn't going far enough, fast enough.


That's a too-often overlooked point, Cap. A large segment of the American population are being radicalized and in the manner you suggest. From Alex Jones to Limbaugh to Hannity, there's an eager audience for the deception and manipulation being dished out to them. And these high priests of the dark arts are getting rich off it.

Absolutely. Yet it's beyond the pale to call them out and suggest they're responsible for radicalizing the American population, let alone to suggest the broadcasts be shut down and those responsible jailed. The same is not true for propaganda aimed at radicalizing Muslims.

It reminds me of Radio-Television Libre des Mille Collines:

Its stated aim was “to create harmonious development in Rwandese society” but nothing could have been further from the truth. It was set up and financed by Hutu extremists to prepare the people of Rwanda for genocide by demonising the Tutsi and encouraging hate and violence.

Some people - including the Belgian ambassador and staff of several aid agencies - recognised the danger and asked for international help in shutting down the broadcasts, but it was impossible to persuade western diplomats to take it seriously. They dismissed the station as a joke.

David Rawson, the US ambassador, said that its euphemisms were open to interpretation. The US, he said, believed in freedom of speech.

Sounds familiar? Well, the International Criminal Tribunal for Rwanda found three of the station's leaders guilty of genocide, incitement to genocide and crimes against humanity. They received 30-year sentences. Freedom of speech has always come with limits - that's why you can be charged with criminal libel, inciting riots, and so on. It may be time we looked more closely at the dissemination of lies designed to rile people up.


Given that a core tenet of criminal law is that a person shall be deemed to intend (mens rea) the logical and foreseeable consequences of his acts (actus reus) it may indeed be appropriate to look at whether these individuals should be held culpable for the damage and loss they occasion.

This dovetails with the emerging legal theory that climate change denial/obfuscation to deter remedial action and that thereby triggers death, injury and loss ought to be considered a crime against humanity.

I read an item, yesterday I believe, that said the debate over climate change should be limited to direct impacts suffered by Americans within the United States. As greenhouse gases are generally emitted into the atmosphere to be carried off on the prevailing winds, no American emitter could be held to account for them. And excluded from consideration would be the historical impacts now coming to roost in the Third World triggering enormous suffering, including death and dislocation. No causal link would be recognized, hence no legal liability.