Is Trump Gearing Up for War? 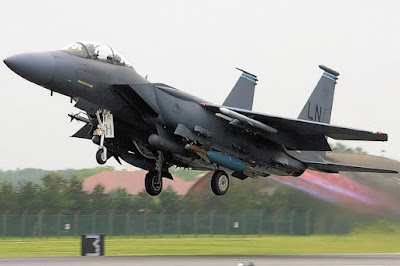 An executive order signed by Trump late Friday may indicate that the Mango Mussolini has war on his mind.

The order allows Trump, among other things, to press into active duty a thousand retired military pilots.


President Trump signed an executive order Friday allowing the Air Force to recall as many as 1,000 retired pilots to active duty to address a shortage in combat fliers, the White House and Pentagon announced.

By law, only 25 retired officers can be brought back to serve in any one branch. Trump's order removes those caps by expanding a state of national emergency declared by President George W. Bush after 9/11, signaling what could be a significant escalation in the 16-year-old global war on terror.

"We anticipate that the Secretary of Defense will delegate the authority to the Secretary of the Air Force to recall up to 1,000 retired pilots for up to three years," Navy Cdr. Gary Ross, a Pentagon spokesman, said in a statement.

This is serious stuff. Those retired pilots have entered the civilian economy, usually in important positions.  Taking them out of airline cockpits and putting them back in uniform for three years may wreck their civilian careers and cause widespread disruption across the private sector.

On Capitol Hill, Sen. Lindsey Graham, R-S.C., and a member of Armed Services Committee, said that the fight against Islamic State and al-Qaeda linked terrorists will be expanding. He spoke to reporters while speaking about the four U.S. soldiers killed Oct. 4 in Niger.

Counter-terrorism rules under President Obama had been too restrictive and ineffective, Graham said.

Last month, President Trump became the third president to renew the post-9/11 state of national emergency, which allows the president to call up the national guard, hire and fire officers and delay retirements.

Those extraordinary powers were supposed to be temporary. But even after 16 years, there's been no congressional oversight of the emergency.

Salon's Keith Spencer describes the emergency decree as a "micro-draft."

It allows the military to recall retired officers to active duty. A USA Today article about this executive order (or rather, this amendment to an existing executive order) noted that the Air Force has been particularly crucial in military operations against ISIS in Syria and Iraq. Moreover, the Air Force has had a pilot shortage brewing for over a decade. In September 2017, military leaders interviewed by United Press International (UPI) that the military was in a crisis. “We're 1,500 pilots short, and if we don't find a way to turn this around, our ability to defend the nation is compromised,” Gen. David L. Goldfein, Air Force Chief of Staff, told UPI. Likewise, a report by the RAND corporation, a think tank, stated that the shortage was partially because “employment opportunities are excellent in the private sector.”

There has been little media coverage of the executive order as of Friday evening, beyond the aforementioned USA Today piece. Around the internet, some social media users were alarmed at the nonspecific nature of the term “national emergency,” which seemed to hint at executive overreach. In the /r/Military subreddit, a nonpartisan US military forum with many veterans and enlisted officers, debate raged over the ramifications of the order. “Can someone convince me this isn’t a prelude to war in Korea,” wrote one user with the handle "NotARandomNumber." Others were less conspiratorial. “My guess is that this is the most deficit neutral way to maintain Air Force staffing in the face of upcoming tax cuts. At least that's what I hope,” wrote user "TheBigRedSD4."

.. I don't have to tell you what it takes to put a combat pilot in the air..
The airframe plus supply & personnel train is astounding.. not to mention requals for all the pilots. Once the entire system heads overseas (call in the Navy please) that entire logistics nightmare must have an existing base or Seabees must carve one out of nothing. Thise airbases require other air support.. and anti aircraft & anti missile defense.. did I mention the troops need food and R n R ?

That kind of callup and campaign buildup is commonly called 'making war'.. in this case we could call it TrumpWar.. and it could provide him with endless bullshit narratives to spew via Twitter, the White Houses lawns & country clubs n golf carts. This is the Country Club Pathetic President, after all.. and those par 3's are a killer for a guy that can't putt worth shit or stay out of the traps

It they're called up they'll go for the most recently retired and those will be fed in the hopper. My guess is the recalls will relieve operational crews, allowing those pilots to be assigned to whatever whims Trump wishes to indulge.

Curious that Lindsey Graham focused on more US bombing in Africa. Sudan, Chad, Libya, where? Boko Haram? ISIS? What?

From what I've read the US military loses about 2,400 pilots a year to retirement or separation. That's one big operation.

.. so 12 hun or so commercial pilots.. who'd qual'd in various commercial multi engine craft would have to requal re cat launch or airfield launch or both .. in American state of the stealth aircraft .. so R n R or perma retire (truly skilled combat jocks) can take its course - How many airframes & logistics train avail re requals ? Gotta get some air hours & exams done.. And how is that logistics supply train doing Donald? Kinda like Puerto Rico ? NoWhereVille ?

I think the call-ups will be air force and they would likely be used to fill out the second-line squadrons, F-16s, that sort of thing.

My take is that this speaks more to the inability of the US forces to retain pilots due to the demanding circumstances of its foreign adventures. Spending long hours cycling off tankers to drop 500 pound bombs on mud wall compounds can get pretty dreary and fast especially on repeated deployments.

For the aircrews it's part of the deal that came with their commission, the right of the government to recall you to active service after you've left. I think there's a cut-off age. The longer you've been out the less likely you'll be recalled.

It never made sense..

Anyong.....it is guaranteed, if Japan is allowed to raise an Army, you can bet your bottom dollar, life on the Korean Peninsula will be a lot more hectic. According to S. Koreans, Sinzo, Abe is a nasty bit of goods. And they ought to know since Japan occupied Korea from 1904 until the end of the WWII. Add to the mix Trump's visit to Japan next month.