How to F#@k Up a Town. A Core Demographic is Bailing Out. 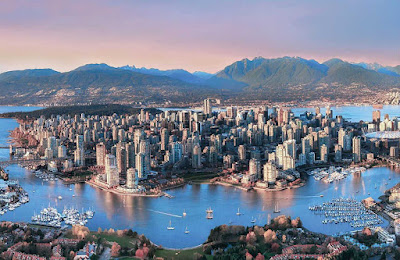 Vancouver may wind up the poster boy for what happens when incompetence and greed become the guiding principles of governments, municipal, provincial and federal.

Vancouver has sky high real estate prices, far higher than prevailing wage rates. If you don't have a lot of money you don't live in Vancouver and probably never will.  That creates a demographic exodus leaving the city and leaving the city without the people needed for it to function. Service jobs go begging. They can't pay what would be a living wage in today's Vancouver.

Millennials have bailed out. Boomers are leaving the hot, congested and sometimes nasty city, selling their overpriced houses and heading for distant places that are simply better.  Young professionals see little to hold them in Vancouver.  If you can't find a doctor or a dentist it's more than an inconvenience.

Now another core demographic is leaving - the middle aged management class. They're beating feet too.


While a lot of fuss has been made about millennials leaving the Lower Mainland, the bigger exodus may be the group that is either nearing middle age or well into it. Generation Xers, or people from 35 to 55, could start bailing at a rate that could turn into a crisis, says Chris Fair, president of Resonance Consultancy, a research and branding firm. Mr. Fair, who also has an office in New York, commissioned Insights West to do a survey. The result was the Future of B.C. Housing report, and he was startled by the response that people with lots of working years ahead of them were planning to leave. Of people between 35 and 55 in Greater Vancouver, 47 per cent agreed that they would be selling their home for a cheaper market in the next five years. For those people, the need for affordable housing and more space was the draw. Kelowna and Victoria are top alternatives.

Through home ownership they've earned enough wealth to go somewhere with greater affordability, where they can own land and bigger homes. They can retire or semi-retire at a young age, or trade their career for part-time jobs, but they can do so because their equity goes further in a less expensive community.

"For all the talk about young people leaving Vancouver, the people with the highest propensity to leave Greater Vancouver is the Gen X homeowner," says Mr. Fair, who presented his data findings earlier this year.

"This is a real crisis for the city. It's not young people or boomers leaving, but it's the management class of the city leaving, people who are in their peak earning years, mid-career. If they leave, what does that do to the economy of Vancouver, and the prosperity of a company trying to find senior level talent?"

The article is misleading. That's not "earned" money. It's windfall money generated by a huge influx of offshore money often just looking for a safe place to park - or hide.  Successive federal governments going back to Mulroney have looked the other way as large amounts of very suspect money flowed into Vancouver.  Mulroney, Chretien, Harper and now Trudeau. They've all betrayed the city of Vancouver and its people. They allowed this to happen. They encouraged it.
Posted by The Mound of Sound at 11:29 AM

It's not just Vancouver, it's global, most major Western Cities are going through this.

Yep. As a 35-55 (leaning to the high end) senior software guy, I have to say that I will be leaving this province once my partner completes a few things that are not easily transferred to a new home. I can also say that in 25+ years I have never seen a company of this size that does not hire developers from outside the area. I don't think this is from lack of desire on the part of the company so much as nobody in their right mind wants to move to a place where rents are double or more what they are used to.


Yes, Anon, Vancouver's economic base has been displaced by this wealth base that's both parasitic and suffocating to the host city. In this global economy wages have to remain competitive but domestic costs are bound by other factors and so the vital connection is broken.